The Jersey City Council reviewed their legal marijuana ordinance, which includes the establishment of a Cannabis Control Board (CCB) to regulate who will receive a license in the city, at today’s caucus. 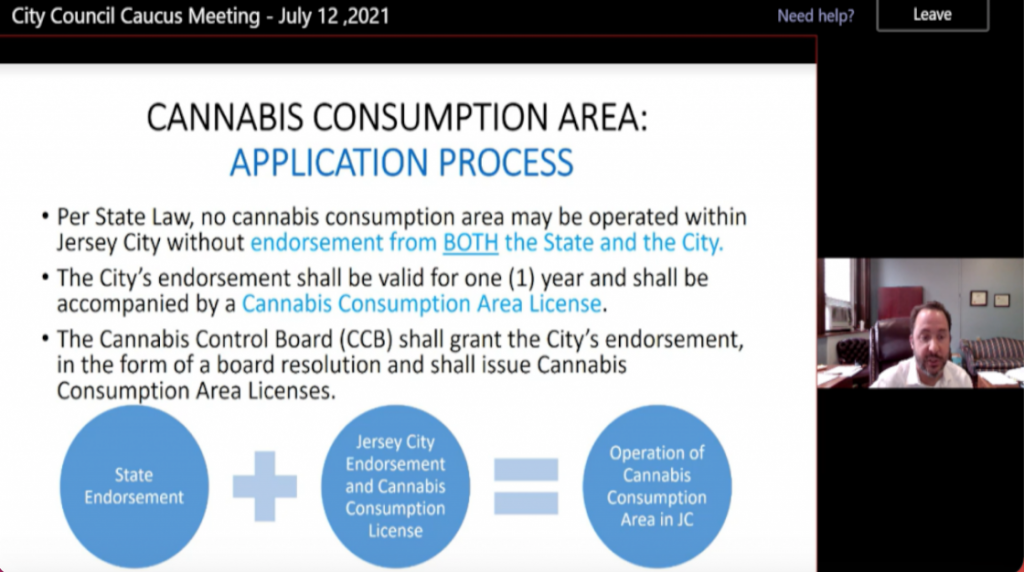 He said it would be comparable to the ABC board, which regulates liquor licenses. Those who wish to operate in JC will likely be in touch with Jersey City Supervising Planner Matthew Ward and other city officials as the process continues, Strasser noted.

Council President Joyce Waterman asked if the political party of the CCB appointees would be considered, to which Strasser said no and that they can add language ensuring the appointee’s impartiality on the applications.

The planning board ordinance allows cannabis cultivations, manufacturers, distributors, wholesalers, and dispensary businesses, as long as all facilities are kept 200 feet from a school.

Ward noted they were purposefully silent on delivery, saying not sure what it would entail, saying it could be like a taxi fleet or Amazon with a fleet of vehicles that need space, compatible to an Uber with drivers using their own vehicles.

All New Jersey municipalities must pass an ordinance regulating cannabis by August 21st otherwise blanket regulations from the state will automatically go into place.

Additionally, Ward said cannabis consumption lounges are being created to allow for those in federal housing or renting a place to consume, also noting that dispensaries could operate lounges as long as dispensary owners meet regulations like cigar lounges.

“In many cases, it might be the only safe space for residents or consumers to consume the product they’re purchasing,” he said, noting the issues those in federal housing and renters might have with consuming cannabis at home.

“Have you spoken to Health and Humans Services and Quality of Life people?,” Councilman-at-Large Daniel Rivera asked regarding the ordinance.

Ward said no since the zoning division would enforce regulations.

“There’s going to be a lot of problems because most you don’t remember the 60s,” Ward C Councilman Rich Boggiano said regarding the ordinance.

“They should have been at the table to see how we can do this when it comes to retail. If not, we need to go back to the drawing board,” Watterman added.

Rivera also expressed trepidation about what was in front of the council.

“I like the ordinance. My concern is that I don’t want to get to the finish line, and I really don’t win because all my T’s weren’t crossed, and all my I’s weren’t dotted,” he stated.

“That would, to me, fall under HHS and Quality of Life as it relates to permitting. I have my concerns regarding consumption lounges.”

Strasser again emphasized the August 21st deadline is rapidly approaching, with Ward adding that he thinks there is still time to coordinate with HHS to make sure everything is going smoothly.

“If you’re concerned about the coordination within the internal city departments and divisions to make sure everything is enforced the way you want it, then we can have those conversations,” Strasser added before Watterman agreed that HHS needs to weigh in on the ordinance.

Strasser said they could opt out temporarily and spend more time crafting the ordinance, but again pointed out that doing nothing could be detrimental here.

“If we do nothing, then it’s like full steam ahead. We have no restrictions in our city,” he added.

“This is not no easy issue. This is something we really have to think about,” Waterman responded.

During the caucus meeting, it was also noted that public consumption of cannabis is currently prohibited in the ordinance.

“Are those transactions taxed, um, through our ordinances or the state?” Councilman-at-Large Rolando Lavarro asked regarding delivery services.

“We don’t actually tax the delivery. It all goes to the state,” Ward answered.

Strasser said that cannabis trucks or pop-ups would not be possible when asked on the matter by Lavarro, Ward said the state is silent on the matter.

Furthermore, Lavarro asked Strasser to do a cannabis presentation to the Municipal Alliance which handles drug addiction issues, which he chairs.

Ward said it was important to note their microbusiness laws because it promotes equity and entrepreneurship and they want to give the microbusinesses advantages.

To be approved for a location, public hearings that locals are notified of and are advertised need to be held on cannabis facilities, he added.