The Jersey City Council unanimously approved the first reading of the Jersey Avenue Light Rail Redevelopment (9-0) that would create a new light rail station and redevelop a large parcel of land near Holland Tunnel. 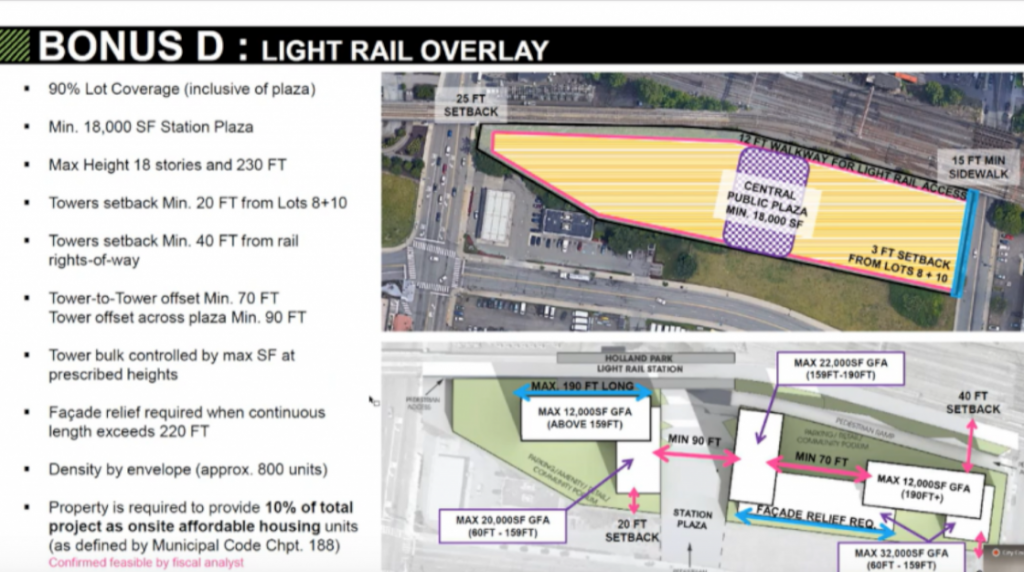 The redevelopment area encompasses 50 acres of property near the Holland Tunnel and is currently anchored by the Lackawanna industrial building.

The plan also calls for 1,300 units to be built, of which up to 20 percent will be affordable housing, and 250 units will be managed by the Jersey City Housing Authority (JCHA).

There will also be units designed to provide affordable homeownership and a new school and library would be constructed as well. The ordinance would split the Holland Gardens complex contained within the area. However, city officials said they will replace all the affordable housing units that will be demolished in the redevelopment.

Danielle Walker, of the tenants association for the Holland Gardens, raised concerns about the redevelopment during last night’s council meeting.

“We as the tenants association, which basically encompasses all of the residents of Holland Garden, would like some clarification on a number of issues preparing for the redevelopment process,” Walker said.

She added they are seeking clarification on the right to return.

“We are also looking for more tenant resident representation on the RFP committee and we would also like a clearer understanding, accommodation rather for the 1:1 replacement,” Walker said.

“Many of us whether new, lifelong – or anywhere in between – residents of Holland do see that community, that area, that location, as home. We remained there for many years, decades, and so we just do not want any other possible design where we’re not able to return.”

She said it is common for people to be transferred from one site to another, and not return.

“We would like to remain in the neighborhood that we basically sustained for many years before all of this aggressive gentrification has taken place and we’re hoping that you could support us in any way that you could,” Walker added.

Holland Gardens tenants protested turning their building into a high-rise during the last quarter of 2019 and the JCHA responded by voting on their end of the Jersey Ave Redevelopment Plan about a year later – related to homeownership and on-site resources.

Before voting for the resolution, Ward B Councilwoman Mira Prinz-Arey said she would do so “with the understanding that some of the requests of the resident council will be heard and considered.”

Ward E Councilman James Solomon, who represents the Downton redevelopment area, said he “would continue to work on the concerns raised by the residents.”

Furthermore, Councilman-at-Large Rolando Lavarro called for making any changes or amendments to address these concerns before adopting the final plan, while CounciL president Joyce Watterman called for a meeting with the tenant association, tenant council, and director of the Holland Gardens.

She also indicated that Solomon, who co-chairs the council’s special committee for new rent control legislation, would also attend.