The Jersey City Council approved a resolution allocation a $1 million contract to Bespoke Health LLC to provide a COVID-19 vaccination site, despite some concerns about the vendor raised prior to the meeting. 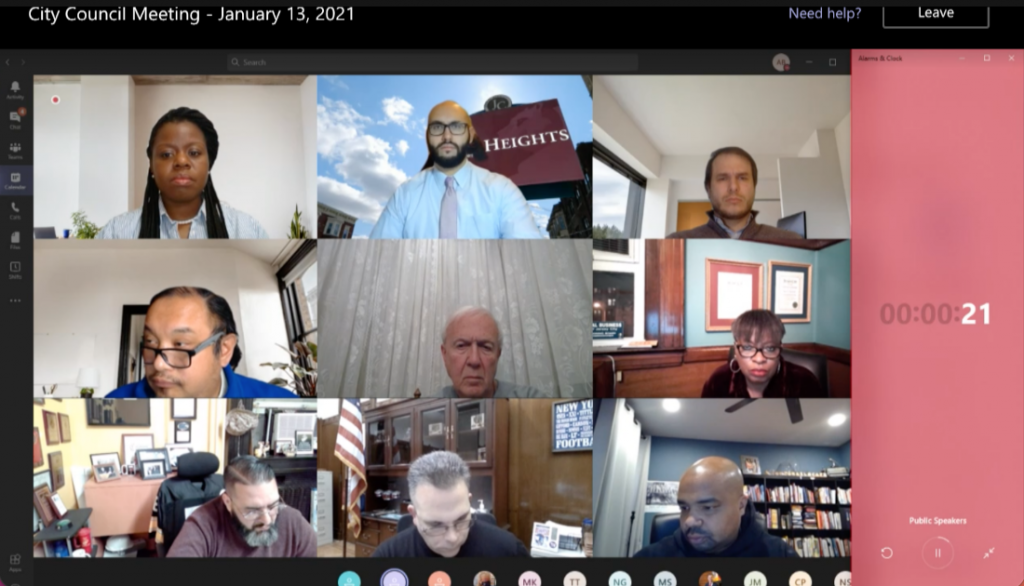 The resolution before the governing body faced scrutiny since Bespoke was only formed in October, according to New York state filings, and only has two employees – despite claiming to have tested over 400,000 individuals during the pandemic.

“I have full faith in [Health and Human Services] Director [Stacey] Flanagan and everything she has done so far in the course of this pandemic,” Ward D Councilman Yousef Saleh said before voting yes.

“My kind of view on the matter is we can’t delay any longer, we have to get vaccines out to folks and there were some questions that were raised, we’ll see what the director says, that struck me as really legitimate about the company’s expertise but this is the group that the city’s going with and they have to deliver,” explained Ward E Councilman James Solomon before casting an aye vote.

Councilman-at-Large Rolando Lavarro, potential challenger to Mayor Steven Fulop, remained skeptical, noting that resident Esther Wintner had made several of the points he wanted to touch on earlier in the meetings

“There’s questions as to whether this company was recently incorporated, the information literally in the resolution package itself indicates they’re recently a new corporation,” he began, noting that that Ari Matityahu and Derek Rapisarda (the Bespoke president) were previously executives with different companies just a few months ago.

“None of that is illegal per se, even if he was operating in three roles in three companies, but it calls into question what the heck is going on here and what are we putting our money into at this point.”

The councilman continued that he was not willing to give the administration the benefit of the doubt after proposing a $2 million contract with Fixtech Medical USA, Inc. last month, which was pulled after it became known that their director of global sales pleaded guilty to fraud in 2015.

Councilman-at-Large Daniel Rivera made it known that he didn’t share Lavarro’s sentiment at all.

“ … It’s so unfortunate council members will actually politicize an emergency contract to help out with the vaccines … it’s like really weird,” he said.

Jersey City is playing catch up when it comes to launching a local vaccination site, with the county, North Bergen, Union City, Weehawken, Hoboken, Harrison, and Secaucus all establishing testing sites around Christmas time.

After the resolution was approved 8-1, with only Lavarro voting no, Flanagan addressed the council on matter.

Rapisarda previously worked at Rapid Reliable Testing and was highly recommended by professionals, according to Flanagan, who added that the New Jersey Department of Health, which vetted them.

The director also noted that Rapisarda has also been involved with aiding the city’s testing site at their Public Safety Headquarters on Marin Boulevard before leaving the company to start Bespoke.

“We needed a quick turnaround and they got testing up and running in under two weeks in the beginning of June. When Derek left the company … a few months later he reached out and said that he started a new company that was doing vaccine work,” Flanagan said.

She further stated that this contract was specifically to set up operations, something FixTech is not capable of doing, but that they already had contracted with the city to distribute masks.

” … I said to Fixtech ‘if you can pop up a pod, which is physical walls in places, sure, send me a proposal.’ We can no longer do that work because we no longer have CARES Act money. In order to do that, we would’ve had to spend the CARES Act money by December 31st.”

Flanagan also said that “I don’t think it’s a crime to be an entrepreneur” or live on the Upper West Side, noting that vaccinations began today and not a single vaccine was wasted.

“ … This team showed be that they’re ready, willing, and able to do everything necessary for Jersey City,” she said regarding what she felt was a proven track record for COVID-19 testing.

In other unrelated votes, the two percent medical cannabis tax, which will go to the city’s affordable housing trust fund, was unanimously approved (9-0) on first reading by the council.

City spokeswoman Kimberly Wallace-Scalcione said that four medicinal cannabis dispensaries have already applied for licenses to operate in Jersey City. The issuing of those licenses has been delayed since December 2019 due to pending litigation.

They also approved the first reading of a measure that would put the city’s salary requirements in line with those of Newark, which would up the overall payroll by about a quarter of a million dollars.

The vote was 7-2, with Solomon and Lavarro voting no.

“Frankly, it’s insane that we’re allowing for salary increases in the middle of a pandemic. We literally laid people off citing budgetary issues,” he rationalized.

Also of note, an ordinance to make Baldwin Avenue a one-way street with bike lanes was tabled as agreed at the Monday caucus in a 7-2 vote, with Solomon and Lavarro voting no.

“A number of people did sign up, and it’s a good general practice to listen,” Solomon said. He believed that a timeline should be attached to the project.

“I’m ok with the tabling … but without putting a timeline and a deadline, I think that’s part of the ruse here …This ordinance is not about having a study. It’s a political deal,” Lavarro.

“What are you talking about Rolando? You’re way off base,” he said.

“I’m not off base. This is a political deal that has been cut. This is the game that’s played here in Jersey City on this council dais. You’re just a pawn in the game of Mayor Fulop,” Lavarro quipped back.

Council President Joyce Watterman agreed that Lavarro was making things more dramatic than they needed to be since a community meeting will be held before the council vote.

” … Once the community meets, we bring the ordinance back. We’re not getting rid of public speaking at all … Don’t put it out there like we’re getting rid of the public comment.”