The Jersey City Council approved ordinances to address homelessness in a multi-faceted effort at the Garden State Community Development Corp. at 514 Newark Ave., as well taking the first step to monitor city overtime on a monthly basis at last night’s meeting. 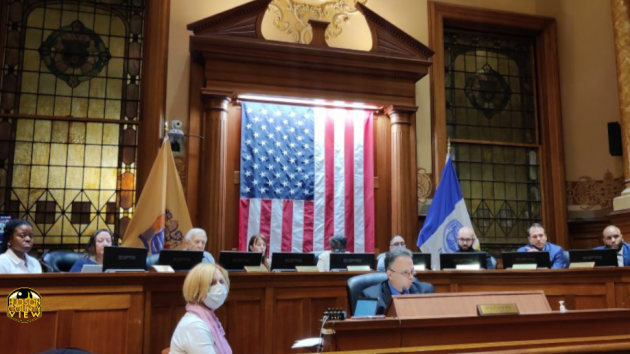 The second reading of an ordinance to put homeless services at the Hudson Gardens apartments was approved after some lengthy discussion.

The joint effort, which also includes the Jersey City Housing Authority and the city’s Division of Community Development, will allow the city to enter into a 10-year lease with the JCHA and GSCDC for a total of $1,533,286.69, the local legislation says.

“We have no problems helping the homeless people. We ourselves are one step away from being homeless, especially living in public housing. Before they had a security guard or police it was very violent there,” Vice President of the Hudson Gardens Management Board Jaleel Williams said, also indicating that people urinated in the hallway and got into fights.

“We’re just asking for security all the time. Could you have an armed guard there or a cop? Not just once in a while.”

Jeanne Daly followed up by saying that City Hall could easily be the outreach center for local homeless populations, stating that this proposal would be “dragging down that community.”

Ward C Councilman Rich Boggiano, who has been adamantly against the concept, asked for a motion to carry, but City Clerk Sean Gallagher said they needed to finish the motion to close the public hearing first.

“Sean, I’m asking for this motion to be carried right now until the community is notified,” Ward C Councilman Rich Boggiano said.

“Councilman Boggiano said there hasn’t been community meetings. Can the administration commit to doing a meeting specific to this issue?” Ward E Councilman James Solomon asked.

“What is it the administration able to say about security?” Solomon continued.

“We absolutely heard the concerns about security. It’s very reasonable to have that security guard or a police officer. I know there’s some concerns about cleanliness. We’ll work with Director Vivian,” Metro replied.

Boggiano again interrupted and said he wanted the matter to be carried.

“Can we carry this until all these issues are solved?” Boggiano asked.

“That’s the direction of the council,” Metro responded.

Boggiano said homeless people go to the bathroom in public spaces and the PATH station often attracts them to the area.

“You want to table or carry? This has been going on since I worked in HHS. It doesn’t make sense to table. These services are in dire need. It brings a certain element,” Ward F Councilman Frank “Educational” Gilmore said.

“We’ve had three meetings with these organizations, and they’ve done nothing,” Boggiano answered.

“The problem with tabling is it’s indefinite,” Solomon explained.

Since there was no second, the motion to table failed, noted Gallagher.

“I want to make sure that everybody’s concerns are heard. I’m willing to work with Councilman Boggiano to see all those needs are met. They want to be secure,” Rivera said.

“The drop-in service center has been there for about 10 years now. There should be other drop-in locations in Jersey City. Homelessness … is across our entire city. I understand Councilman Boggiano’s concerns. This is an administrative function to make improvements in the center,” Ward B Councilwoman Mira Prinz-Arey stated.

She said there would be a kitchen to feed them, a shower, washing machines, and which would also help foster more human interactions.

“I’m the only one this council that has met with Garden State Episcopal, Port Authority, and … they have done nothing. The city is shoving this down the tenants’ throats. A lot of the tenants are really afraid,” Boggiano exclaimed.

“I understand that there are legitimate concerns regarding security. I think that the administration should address those concerns. These issues can’t continue to be ignored. I do think these resources are necessary to help the unhoused,” Ward D Councilman Yousef Saleh said.

Solomon also spoke in favor of expanding drop-in services, said he is working with St. Lucy’s Shelter by the Holland Tunnel for them to offer such services.

“It’s a citywide problem. It’s a technical change to allow a program approved a year ago to move forward … It’s really important those functions are met.”

“I understand the concerns that Councilman Boggiano have. Certain demographics bring about certain environments. These are human beings. The onus is on us to provide services. We must ensure there is a security measure in play. A lot of the homeless population have mental health issues,” added Gilmore.

Councilwoman-at-Large Amy DeGise acknowledged that while they can’t cure every issue immediately, they can make progress and this plan would do that.

“We might have to consider putting those fixed [police] posts in our public housing areas.”

“I’m very concerned about housing. That’s where I grew up. Security is important. If anything else goes wrong, call us at City Hall,” stated Watterman.

The ordinance passed on second reading by a tally of 8-1, with Boggiano voting no. After the vote, the Ward C councilman made it clear that he was incensed with the outcome.

“I’ve been fighting for the homeless in Journal Square. I’m totally disappointed with all of you. This is just a yes council that does what it’s told. Most of the people are furious about this and they’re not going to forget this,” Boggiano said after the vote.

“We have a gentleman from the housing project that represents the community. He basically said … that their main concerns are safety. Your security will not be breached because we will have the Jersey City Police Department there going forward,” Rivera said.

This morning, Mayor Steven Fulop tweeted that he was thankful the council approved the measure.

Additionally, Solomon said he received “a lot of very constructive feedback related to overtime compensation” regarding his first reading ordinance allowing the council to monitor department spending after last year’s tax hike, which they discussed at caucus.

He explained that the new clause says each department director will report to the council, identify overtime spending, and compare it to the overtime budget.

In addition, they removed the provision for identification of overtime pay to each employee and the reason behind it.

“If there’s substantial changes, that would require re-advertisement,” Gallagher noted.

“We definitely need to sit down and chat more about it. It might require substantial changes. But we’ll keep you posted,” Councilman-at-Large Daniel Rivera replied.

Nevada man gets 18 months for using Jersey City property to...