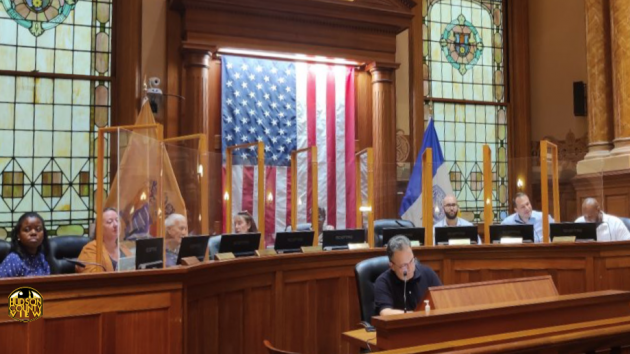 “Part of the cannabis control board review process requires that an applicant provide a community impact plan which will show how an applicant intends to have a positive impact on their community,” Baker told the governing body.

“They must also provide a written description of their social responsibility, philanthropy, and ties to the host community, as well as a workforce development plan. The community impact plan, in general, should show how the applicant intends to address any issue that arises from the operation of their cannabis establishment.”

He continued that this could include traffic mitigation efforts, security/public safety, and neighborhood beautification.

“With regards to philanthropy, it’s very important that council members and other city officials not interact with applicants, charities, and other non-profits and recuse themselves from the application process or any vote on an application if such interaction may cause a conflict of interest in order to avoid a potential appearance of impropriety.”

Baker further stated that the city’s Law Department is working with other partners in the administration and the cannabis control board to establish a definitive process for vetting and qualifying nonprofits that will be eligible for these endeavors.

“This should have been read to the city council six months ago,” Ward C Councilman Rich Boggiano exclaimed.

Ward D Councilman Yousef Saleh followed up by asking if an applicant needs to have an MOU with nonprofit partners before they apply for a license.

Ward A Councilwoman Denise Ridley asked what they can do to enforce the rules and regulations.

“The cannabis control board is gonna get it in 12 months. They’ll review it. Say they promised to do an expungement clinic and failed to do it: the question then becomes why and possibly their renewal gets disapproved,” Baker responded.

Watterman noted that the community impact plans should include second chance programs to help those harmed by cannabis prohibition.

“It was supposed to help those who was disenfranchised, to my understanding, based on the state law. We’ve seen applications that had nothing to do with that,” she noted.

Additionally, Commerce Department Director Maynard Woodson pointed out that two resolutions to approve the Cannabis Place 420 Corp. and Oceanfront Holdings to operate adult-use cannabis dispensaries were back on the agenda.

“Did the board vote on adding that? I know residents will be concerned. So the CCB had to vote it to accept it, correct?,” Watterman asked.

“No. The discussion with the board attorney … was to accept the updated application because the presentation included everything else that seemed to be more important to the community,” Woodson said.

“Is it acceptable by law then? If the attorney said it was ok, then I want it on the record,” Watterman said.

Business Administrator John Metro said the CCB Board Counsel Ron Mondello had to discuss the matter with Baker, who would then fill the council in on the details before tomorrow’s regular meeting at 6 p.m.

“Initially, there were no partners that lived in New Jersey and then they subsequently found another partner or did someone move?,” Ward F Councilman Frank “Educational,” Gilmore asked seeking clarification.

“They added on a partner that was I believe one of the persons helping them with the approval process,” Woodson explained.

“The law said they have to have five percent ownership and live in the State of New Jersey for at least two years. That’s why I want a letter from the lawyer. Because people will think it’s our decision,” Watterman asserted.

Last month, Watterman apologized for voting yes on a resolution signing off on a dispensary co-owned by her daughter, attributing the error to being tired after an over five-hour meeting where the majority of public comment was about whether of not Councilwoman-at-Large Amy DeGise should resign over a hit-and-run.

As for Oceanfront Holdings, Ward E Councilman James Solomon had met with them and said they were working on sitting down with a neighborhood association to discuss the project.

“Happy to have them on the agenda,” Solomon said.