The Jersey City Cannabis Control Board (CCB) approved three applications and carried one more in an unusual scenario where the applicant was represented by an indicted attorney. 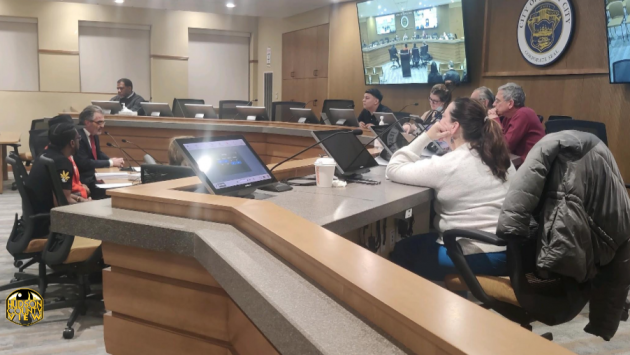 “I want to thank Glenda Salley Perkins for her service to the board,” CCB Chair Brittani Bunney said. The city council voted for Cantarero to replace her.

Bunney was again named chair for 2023 by a vote of 4-1, with Commissioner Courtney Sloane voting no. Then Bunney nominated Cantarero as vice chair, which went through by an identical vote.

Memes Danckk World, located at 492 Communipaw Ave, was represented by James Lisa. He said a dispensary near their location was approved at the last meeting and asked for a continuance, which they received.

Their application will be heard at the March 13th hearing. Lisa was indicted by the U.S. Attorney’s Office just under two weeks ago for allegedly defrauding clients out of $2 million in a case dating back to 2014.

Local Modiv, LLC at 155 Newark Ave was first. They had previously been denied a license, but then filed suit in Hudson County Superior Court and had that decision overturned.

The NJ Cannabis Regulatory Commission (NJCRC) also awarded them a license in October.

At that time, attorney Frank Vitolo stated “F-L-W-R, formerly Oceanfront Holdings, my client has approved approval to operate a medical license… which is in close proximity to the Local Modiv site.”

The NJCRC approved their name change during their January meeting.

Vitolo continued that they plan to open their medical cannabis shop in April and their adult-use business in June. Vitolo said they would be neutral on Local Modiv if it doesn’t harm their operations.

“The board is not going to comment because there is pending litigation. We have no say in this. We were ordered to issue a resolution. Your best place to go is to the city council,” Bunney replied before the application was approved unanimously (5-0).

The CCB approved them unanimously, 5-0

The next application was JC Element, LLC, at 365 Central Ave. in the Heights.

“They are a social equity applicant. They have conditional state approval. They are both lifelong Jersey City residents,” their attorney John Collins said.

Owner Rafael Corona said he had tragic family deaths growing up in the city and became overwhelmed with emotion.

“Trying to get into the cannabis industry was very challenging, especially with no money.  “We’ve been told by many business owners … that they don’t want their kind,” co-owner Kushan Patel said.

He noted many charged them exorbitant prices for real estate. Patel explained they found a location near Corona’s home. He said their second lawyer quit on them due to a conflict of interest.

“It’s almost impossible to make enough money for rent,” Patel lamented, further indicating that he has been involved with the community since 1996 and that they would only hire minorities.

SCORES Re-entry CEO Levi Johnson said they are working together, but don’t have a signed memorandum of understanding (MOU) yet.

“We’ve never seen you before,” Bunney replied, noting many had referenced his organization.

Johnson said he was attending classes at NJCU and previously had a conflict.

“What part will you play?” Sloane asked Patel.

“I’ll be the compliance officer. Mr. Corona will be the day-to-day guy,” Patel said.

Mondello pointed out that their application had been previously denied and their location had since been part of Artistic Dispensary’s application.

“They assumed their lease with a personal guarantee. They’ve leveraged their entire net worth. It was the only way they could get the site. They took the only opportunity they had. The prior applicant has nothing to do with them,” Collins stated.

Mondello also indicated that Artistic had received planning board approval.

“The only thing they’re changing is the sign. They’re on the hook for everything,” Collins added.

“Anything that comes less than two weeks might not be seen. We are merely a step in the process,” Bunney explained.

Nonetheless, Commissioner Jeff Kaplowitz made a motion to approve the application.

“I wish you all the luck in the world,” he said.

The measure was approved 4-0(1), with Bunney abstaining.

City Farm, LLC, at 298 Central Ave, was next. They were represented by attorney Fruqan Mouzon, who explained they were a micro license that the NJCRC had already approved. They were among the companies seeking a city council resolution last March.

Diana Dominguez, a local resident, will be the CEO. She opened Hemp Social in downtown Jersey City with a partner. She said they plan to work with non-profits to help the community.

“Why wouldn’t you stay in that location?” CCB Commissioner Stacey Flanagan, also the city’s health and human services director, asked.

Dominguez said she ended her partnership that led to Hemp Social, where they had planned to secure an adult-use cannabis license.

Mouzon noted that was the original plan, but they had to pivot.

“Are you all concerned about the number of dispensaries on Central Ave?” Bunney asked.

Mouzon noted that Byan Oluidi, of Linden, has experience in the cannabis industry.

“Working for one of the biggest firms, advising cannabis companies, cash flow was a huge financial hurdle,” he said.

What’s your prediction for cannabis in five years from now? Kaplowitz asked.

“I think it’s going to blow up,” Oluidi said.

They were approved 3-1(1), with Bunney voting no and Flanagan abstaining.

Buku Culture, LLC, at 390 Tonnelle Ave, was next. Attorney Chirali Patel noted they’re a woman and minority-owned micro business. Mondello noted they want to convert from a micro to a regular one in a year. He noted they might have to return.

Buku Culture President Ronnie Smith said she lived in East Hanover in Morris County. She noted she was born in Trinidad and grew up in Brooklyn. Smith explained she has management experience and the NJCRC approved them in September.

Buku Culture CEO Claire Denise Kelly, of Long Valley, explained their MOUs. She said they wanted to help the homeless, as well as that she been in touch with a nearby school to ensure they are not offended.

Bennett Pironti, also of Long Valley, said he has been working with companies that could help the homeless.

From there, Flanagan wanted to ensure they coordinate services and suggested they work with the county.

“Do any of you live in Jersey City?” Bunney asked.

“How far are you from Jersey City?” Bunney asked.

“The manager they want to hire is going to be a Jersey City resident. That 24/7 contact will get transferred over,” Patel said, with Smith following up by stating they sough to only hire locals.

“I always feel confident voting for an entity that owns the building. I do recognize they don’t live here but to me, owning a building is a next level investment,” Flanagan said.

A lot of people are hiring one person from SCORES, Bunney noted, before the application was approved unanimously (5-0).