The Jersey City Board of Education approved a $973,855,598 preliminary budget on a second try at a lengthy meeting last night. 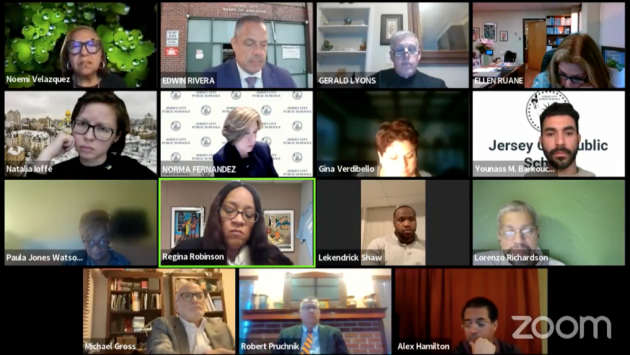 The five-and-a-half hour meeting was initially dominated by public comment, where about three dozen people spoke in favor of passing a fully funded budget.

Parent Meghan Howard Noveck, also a member of Jersey City Together, said that the trustees should consider where the rhetoric that this budget will not be affordable for taxpayers is coming from.

“I urge you to consider who we are hearing from that we cannot afford this budget. Is it a single parent working two jobs with kids in the public schools who relies on wraparound services like KASPER? Is it from a family who has recently immigrated to the U.S. and whose children are receiving English language instruction in our public schools?,” she began.

“Is it from a family whose child receives critical public education services at the JCPS? Or is it from families who already opted out of the public schools in favor of the ever increasing private schools? Or from folks who threaten to move to the suburbs if we raise our local school tax levy, the threat of course undermined by the fact that their school tax rate will be markedly higher. We cannot afford to not fund our public schools.”

Mike Greco, a local teacher and parent, urged the board to pass the budget as is, noting that issues like aging infrastructure and a teacher shortage have been exasperated by the COVID-19 pandemic and aren’t going to fix themselves.

“This is the only way forward and I implore you to pass the budget as is,” he said.

Trustee Alexander Hamilton, who said at Thursday’s meeting that he was not in favor of a $2,400 annual tax increase, indicated that if this amended budget – which would have an annual tax increase of $1,608 on a home evaluated at $460,000 – passed or not, it would only be “a band aid” for the district’s financial woes.

“If this budget passes, it is still a band aid, not because the schools are not fully funded, but because next year we will go through the same exact thing … I know that there’s a campaign out there to get the state to do the right thing, by the way, the state is wrong for how they’re handling this, I’ll be on record saying that,” he explained.

” … As far as the city goes, I think there’s a lot of things there that we understand are not being done properly about how taxes are distributed, collected, enforced, payroll tax, all these sorts of things and we’re always swimming in this whole pool of wrong that no nine members of this board can solve. At the end of the day, we always end up with the gun to our head and we have one solution.”

He also called for the budget to be introduced in February going forward so that the board had more time to evaluate the spending plan.

Trustee Lorenzo Richardson argued that raising the school tax levy was not necessarily the same thing as raising school taxes and that the city needs to be doing way more than what they’re doing now for the BOE.

He also added that Gov. Phil Murphy (D) has announced a senior freeze program that could give residents who apply a $250 tax rebate at the end of the year, so raising the levy would not be as harmful as some believe.

“We raise this levy where we need it to be, but we can work with the city to offset the cost because if you look at the dollar amounts and the percentages I gave you, the city is already – at least in 2020 – they were getting $103 million more than we were,” he stated.

He continued that between the courts, parking, the hotel tax, and other revenue streams, the city clearly has the ability to fund the schools at a higher level than they have been doing, they simply do not have the will to do so.

After about a 90-minute closed session, School Business Administrator explained the changes to the budget, which included anticipating $65 million from the payroll tax, having a local tax levy of $426,427,606, and potentially using a $142,667,722 bank cap.

The budget proposal increased by about $18 million by adding more funding for their long-range facilities, with the potential school tax levy down significantly from $205 million. To make up the difference, $30 million from excess funds, along with a $6 million surplus from last year, would be utilized.

Robinson and Superintendent of Schools Dr. Norma Fernandez both seemed perplexed by the outcome.

“This submission has to be submitted to the county by Monday, March 28th. As I said earlier, as Dr. Fernandez has said, I need to submit one way or another,” expressed Robinson.

“Trustees, thank you for your honesty, however, as a board, this a decision that you have to make on behalf of the students and the Jersey City Public Schools. As you know, there’s a lot riding on this decision,” said Fernandez, noting that local control would not fully return if they couldn’t submit a spending plan to the county.

After about 30 minutes of trying to decide if they would adjourn the meeting or take another vote, Watson-Jones asked about the tax increase and impact on local control again.

Upon advice of Board Counsel Michael Gross, she made a motion to reconsider which was seconded by Richardson.

The motion and the second vote on the budget was approved 5-4, with Board President Gerald Lyons, Vice President Gina Verdibello, along with Trustees Gina Verdibello joining Richardson and Jones-Watson in voting yes.

A second vote to approve using the new bank cap figure was approved 7-2, with Shaw and Barkouch voting no.

City spokeswoman Kimberly Wallace-Scalcione said this afternoon noted that the projected tax increase is up significantly from last year and blamed the hike on “bloated salaries” at the administrative level.

“The superintendent and board of education raising taxes to the tune of $1,600 plus $1,000 from last year is wrong. Especially when at the same time they have bloated salaries in their central office and have not looked at any common-sense changes that have been recommended to them for years,” she said,