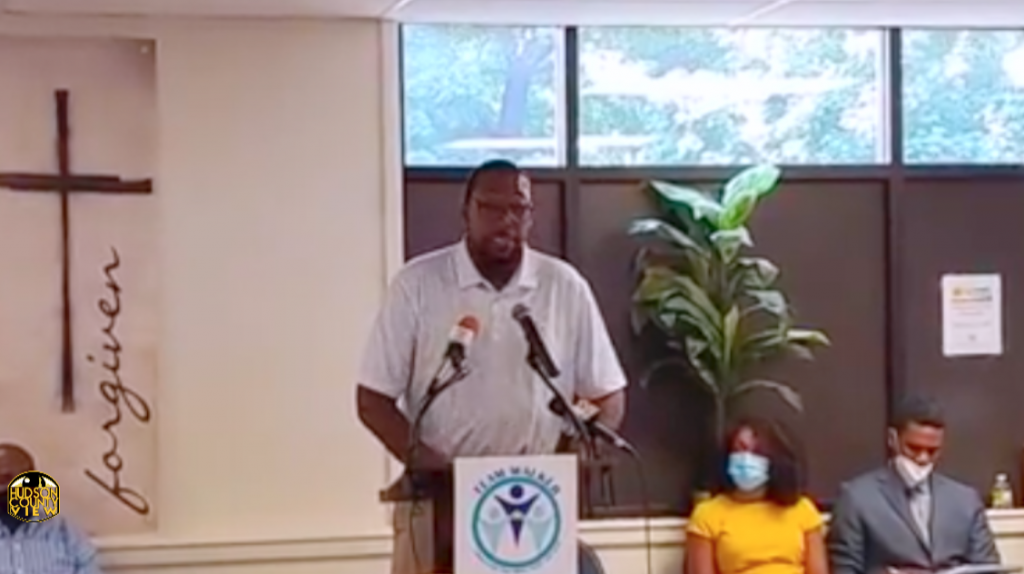 “We can’t not say you’re not part of the community. We want to give them resources also,” Walker said of teens getting involved with gangs.

“We can’t just go in the streets and say ‘stop doing this’ if we don’t have nothing else for them to do. It’s a health crisis too. Too many kids are losing their lives.”

He also noted that a shooting near his Team Walker office last week forced them into a lockdown.

The proposed one-year, $500,000 pilot program is expected to be approved by the Hudson County Board Commissioners at tomorrow’s virtual meeting.

Walker continued that the youth mentoring program, scheduled to open in January, will seek to combat the increased violence in the wake of the CODI-19 pandemic.

“This has been a bad year for the city as far as shootings as well as almost every city in the United States,” Hudson County Executive TomDeGise said at the podium.

He noted not only is the family of the victim impacted by a shooting, but also the family and friends of the perpetrator.

“We need to be able to send out some life rafts every once in a while to bring them in,” DeGise added, also crediting Hudson County Health and Human Services Director Darice Toon for spearheading the effort.

Toon thanked DeGise for his leadership before noting that they have many resources, including mental health and addiction counseling, to help to take a holistic approach to helping troubled youth.

Additionally, the program will connect youth in the juvenile justice system on probation with adults who were also on probation when they were young, aiming to serve as mentors.

The mentors will also help them link to other social services and community resources.

Toon also noted that the Credible Messenger Mentoring Movement program was brought to her attention by Dennis Febo, of Guazabara Insights, who arranged her introduction to Clinton Lacey whose efforts in New York City led to a 60 percent reduction in recidivism in those who participated in the program.

As a result, Lacey will be retained by the County Department of Health and Human Services to implement the pilot program.

They will begin with 45 youths in the program, ages 10 to 17, throughout Hudson County involved in the juvenile justice system.

Furthermore, Hudson County Prosecutor’s Office Chief of the Juvenile Unit Lisa Ledoux stepped in to speak on the behalf of Prosecutor Esther Suarez.

“This program is needed now more than ever. Not only has violence increased but the kids are getting younger and younger and we need to do something,” she said.

“We are making great strides in fighting the COVID-19 pandemic in our community, but we need a new approach to the epidemic of violence and youth incarceration that continues to be a mortal threat to that very same community,” Walker added.

Jersey City Ward F Councilman Jermaine Robinson noted that the wheels of government tend to move slow, case in point, it took about two years to work out all the details of this program.

He also noted that the program can reach people he cannot as a councilman.

“Sometimes when you’re stuck on the same block you see the same thing, you don’t get out of the city, so your horizon is not broadened,” Walker lamented.

He explained the program will seek to expose the youth to different opportunities and resources to address that.

“It’s just one aspect we need in the community as far as training, job readiness and all of those things go together to end this problem,” Robinson chimed in.

Later, Febo said his non-profit group has been working with those in the juvenile justice system for eight years.

He said they will provide family, therapy, parent support services, trips, rides to the youth.

He noted that through his work in youth mentoring, he participated in efforts to meet with Lacey on the nuances of the program.

The entire press conference streamed live on our Facebook page and can be viewed below:

Jersey City man found guilty of being a felon in possession...