While the vast majority of the people at the Liberty House Restaurant Thursday evening were rallying for U.S. Senator Bob Menendez’s re-election, a small group was there to express their displeasure that the county is still working with U.S. Immigration and Customs Enforcement.

“Stop colluding with Trump!,” a group of about a dozen people chanted across the street from Liberty House around 6 p.m. as people were arriving to the general admission portion of the Hudson County Democratic Organization’s annual gala.

Just a couple hours prior to the event, County Executive Tom DeGise announced that his administration would get out of their deal with ICE, which allows immigrant detainees to be held at their jail, by the end of 2020.

Despite this action, not everybody is convinced that the county is acting in good faith.

“We’re still honest because, to be honest, it feels like crumbs that are way too small. This is an immigrant population suffering right now and the contract has to end now,” said Rev. Seth Kaper-Dale, the co-pastor at the Reformed Church of Highland Park.

” … The freeholders have to acknowledge that what they’re in the middle of is morally just a disaster. And with this president currently in power, and to side with him, feels like collusion with someone carrying out racial and ethnic cleansing under the guise of immigration law and order.”

Kaper-Dale continued that he is not accepting the fact that budgetary concerns are keeping the agreement in place: “If you’re dealing in something deeply sinful, you just have to deal with the fact that getting out of it might cost you something.”

Prior to hitting the stage at Liberty House and soaking up cheers and applause from dozens of Hudson Dems, Menendez spoke to Hudson County View about the protesters, noting that sometimes people forget about the bigger picture here.

“Well listen: I think the county’s decision is moving in the right direction. I applaud the county executive and the board of [chosen] freeholders for moving in a direction that will end the contract,” Menendez began.

“But here’s what my friends forget: the big problem here is that the president of the United States has a policy of detaining immigrants who are no threat to our security and no threat to our society. And until we change that policy, whether it be Hudson or somewhere else, we’re gonna still have a problem with detention: that’s where the fight should be.”

Bayonne schools will start ‘virtually for all our students’ on Sept. 9th, superintendent says 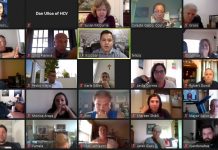