The Hudson Reporter, a local weekly newspaper that has covered all 12 municipalities in the county for the past 40 years, is abruptly closing at the end of today. 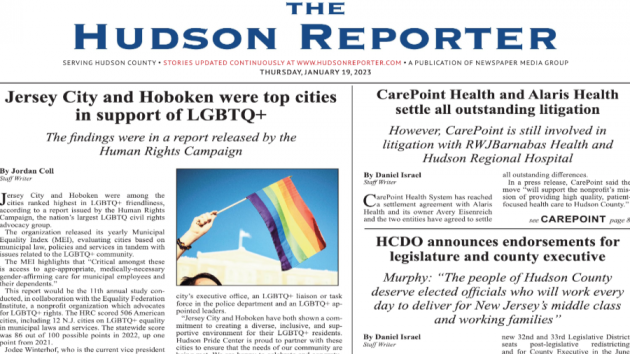 “It is with great sadness that I announce the Bayonne Community News and Hudson Reporter is no longer publishing. Today was me and my colleagues’ last day. We were told it was due to a ‘revenue versus expenses’ situation. The papers will no longer be published online nor in print,” staff writer Daniel Israel tweeted.

“It was my honor to write for Bayonne for the past three years as the last Staff Writer for the paper. I look forward to staying involved in the community and what future endeavors bring me. I wish the best of luck to my former colleagues Editor Gene Ritchings, Staff Writer Jordan Coll, Art Director Terri Bish, Ad Manager Tish Kraszyk, Senior Account Executive Ron Kraszyk, Bookeeper Sharon Metro, and Art Director Mary Helen Fink. Thank you to all the readers and I look forward to sharing my work from a new place soon!”

Israel additionally told HCV that no one on staff was offered any severance pay.

The Hudson Reporter was founded in 1983 by Hoboken-based developer Joe Barry and was sold to the Lucha Malato and David Unger in 1999.

Their office was located at 14th and Washington Streets in Hoboken between 1995 and 2016, when they relocated to 447 Broadway in Bayonne. They later moved nearby to 166-168 Broadway in the summer of June 2021.

The paper was sold to the Cherry Hill-based Newspaper Media Group, a publisher of over 50 weekly newspapers, on June 10th, 2018.