The Hudson County Board of Commissioners are slated to vote on the first reading of an ordinance that would limit the public portion of their meeting to three minutes per speaker and two hours overall. 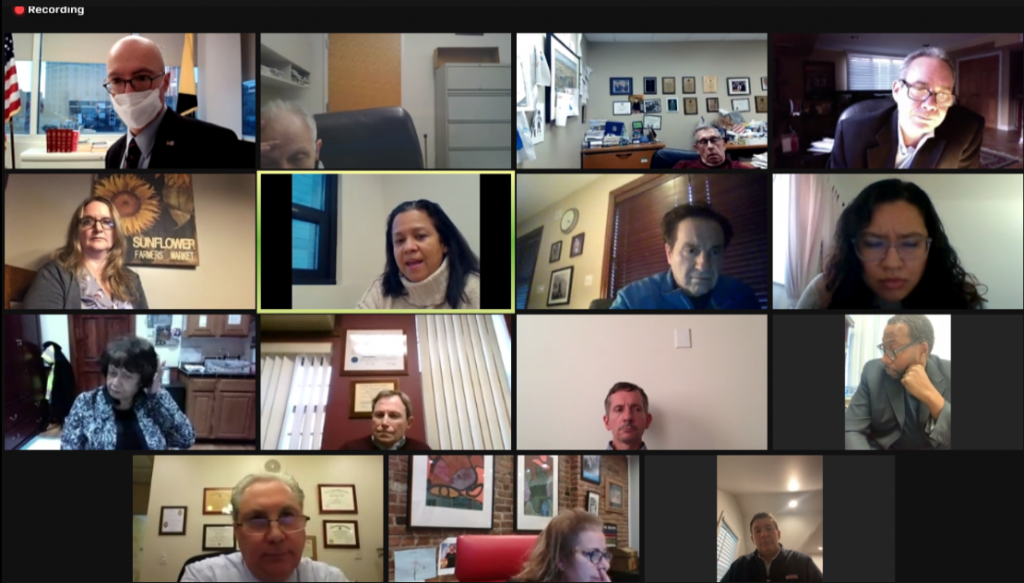 “Obviously I’m opposed to this … but my biggest concern is the limit to two hours. Two hours is two hours, it doesn’t say … at least 40 speakers can speak,” said Commissioner Bill O’Dea (D-2) at this afternoon’s caucus meeting, which lasted about an hour.

He explained that for example, if one speaker is given an extra minute to speak, the meeting is then cut to 39 speakers overall, and so forth and so on, if the public portion will end after exactly 120 minutes.

O’Dea also wondered how only 40 or so speakers would be selected if 100 hands are raised on Zoom – the way all of the board’s meetings will be conducted until further notice after an 8-1 vote at a special meeting yesterday (Commissioner Fanny Cedeno (D-7) voted no).

Commissioner Al Cifelli (D-9), who seconded the agenda item after it was introduced by Chair Anthony Vainieri (D-8), said that the chair and the rest of the board would have discretion to extend the public portion beyond 120 minutes if they saw it fit.

” … The problem that I find is that about three, four, five hours – 30, 40, 50, speakers – I think that’s cumulative in nature. After a while, a lot of those voices are the same and that becomes cumulative,” he explained.

” … I just think it’s unrealistic for the public to think they can speak on an item for two days [straight] if they want to. Our format gets abused: if people want to say I’m a fascist or that I’m anti-transparent, so be it.”

Between November 24th, when the commissioners, then still freeholders, approved renewing their contract with U.S. Immigration and Customs Enforcement (ICE) for up to another decade, the public comment lasted for over nine hours and the meeting lasted for about 12-and-a-half hours in total.

Extended remarks from the public continued through December (and actually started at the meeting prior to the ICE vote), but were cut short on December 23rd after four electeds left the meeting early, leaving no quorum for the session to proceed.

Commissioner Anthony Romano (D-5), the vice chair of the board, indicated he supports this new measure since members of the public sometimes opt to use their full five minutes until their time runs out – even if they aren’t speaking for the whole time.

Additionally, he said this will cut out unnecessary back and forth with members of the public, in particular those who are only interested in name calling and hurling insults.

Vainieri reiterated that the two-hour run time was not a hard stop and could be extended, as Cifelli said previously, but said that he wasn’t going to allow meetings to continue to be drawn out for political theatre.

“… When it comes to the people that abuse this time, we gotta fight back. Because we didn’t vote a certain way you wanted us to vote, you abuse it,” he stated.

“It’s over, it’s time to move on. The county is moving forward. … Don’t call me at my business and say ‘I hope you die of COVID’ … This is the plan I see to protect all of us.”

O’Dea countered that the ordinance, as it’s currently written, does not include language to allow the board to extend the public speaking portion if they are so inclined.

“Do not punish the many for the mistakes of a few,” he added, later stating that he is strongly against members of the public making threats to officials.

To that end, Vainieri, Cifelli and several other commissioners said they were happy to see it amended prior to Thursday’s vote.

Vainieri also took umbrage with the notion that this is a measure intended to punish people.

“It’s not a punishment ordinance: it’s to protect the commissioners … this has gone too far. I’m not sitting here for 10, 12 hours every meeting over the same stuff every single meeting,” the chairman said.

The changes may be permissible after the New Jersey Department of Community Affairs adopted new rules for virtual meetings throughout the state back in November, as The Record reported.

Back to September 2018, prior to the ICE contract being extended by two years, the board voted to scale back public comment from 15 minutes to five minutes.

UPDATED: Prieto, Wisniewski to introduce $15 minimum wage bill in the...