The Hudson County Board of Commissioners okayed the first reading of an ordinance that would scale back public comment to two hours overall and three minutes per person. 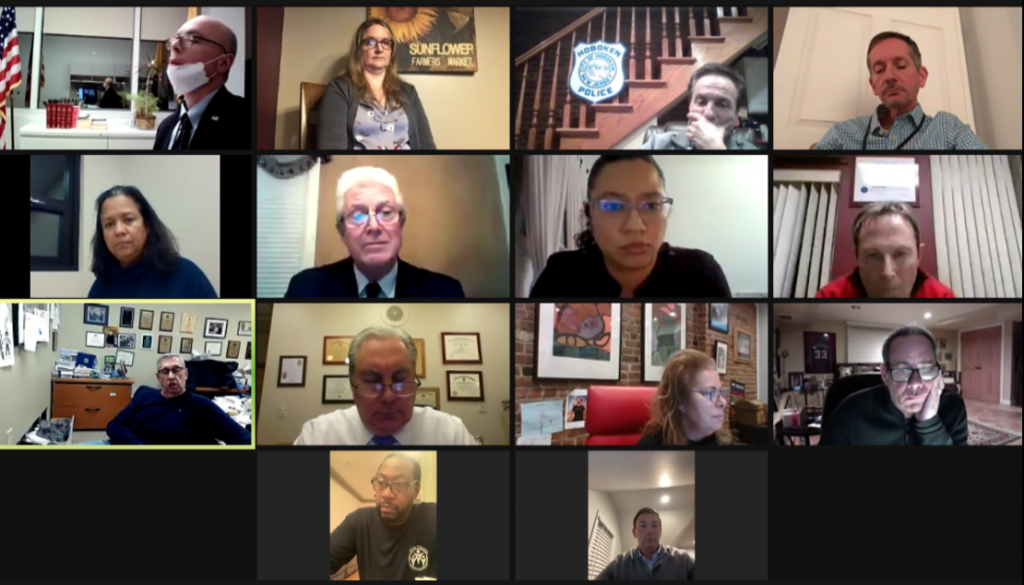 “I think it’s embarrassing the county government is even considering limiting public comment … just because you had to listen to 12 hours of public comment on the ICE contract doesn’t give you the right to limit comment,” said Kearny resident Matthew Skolar.

“We’ve seen in the past couple weeks that democracy is literally under attack in this country … I can’t understand how you think further limiting democratic participation is the right move to take at this time,” said Caitlin Sherman, of Weehawken.

The measure was introduced at Tuesday’s caucus meeting and has faced criticism since public comment has been quite prominent ever since the county’s contract with U.S. Immigration and Customs Enforcement (ICE) came up again in November.

Ultimately, the board renewed the contract for up to a decade at their November 24th session, with over nine hours of public comment against the measure and the meeting spanning a whopping 12-and-a-half hours overall.

Longer public remarks continued through December, with the exception of the meeting right before the end of year holidays which ended abruptly after four electeds left early, leaving no quorum.

The latest ordinance in front of the governing body has also been negatively received since comment on agenda items was reduced from 15 minutes to five minutes in 2018 shortly before the commissioners, then freeholders, extended their ICE contract by two years.

“ … I get the feeling you want to duck us. We’ve been labeled as extremists … I bet many of you decry cancel culture and yet you are here doing the same thing, but you aren’t a private entity … No one who chooses to speak can be labeled an abuser of the system,” exclaimed Gary Spingarn, of Jersey City.

“If the public felt like they were being listened to, you wouldn’t need to continue limiting their ability to speak,” added Marc Devens of the Hudson County Progressive Alliance and Solidarity Jersey City.

Hudson County Counsel Ed Florio also pointed out that their bylaws allowed for public commenters to sign up to speak no later before than the day before their meetings, which led to further frustration from residents.

“I think it’s a continued disservice to the public and a complete failure on how this board choses to operate … You should resign if you don’t want to actually listen to what the people want to say,” exclaimed Kason Little, the founder of the Black Lives Matter group in Elizabeth.

The ordinance was introduced by Board Chair Anthony Vainieri (D-8) and was seconded by Commissioner Al Cifelli (D-9), who pushed back against the notion that the measure was overreaching.

“We don’t have to defend ourselves against reasonable regulations and parameters at this time … This ordinance is totally reasonable,” Cifelli said, later exclaiming that “it is our meeting and we can control it.”

Evidently, that explanation wasn’t good enough for the members of the public who called into the meeting.

“It’s absolutely disgusting that you would think to cut people’s time. It’s just absurd to me. If you care what the people have to say, why would you reduce their time to speak?,” said Danielle Harari, an 18-year-old resident of Fair Lawn.

Eventually, the measure was broken into two votes: the first for an amendment to allow the two hours to be extended at the discretion of the chair if necessary, which passed 8-0-(1) with County Commissioner Bill O’Dea (D-2) abstaining.

Then, on first reading, the measure than passed 8-1, with O’Dea voting no.

“Limiting the time doesn’t seem to be fair or make sense at all. If 100 people seem so passionate about an issue and they want to come and speak about it and we have to sit here for four hours, then so be it,” said O’Dea, who recalled staying in Jersey City City Hall until 3 or 4 in the morning when he was a councilman.

Still, Cifelli stuck to his guns when responding to his colleague.

” … If 100 people want to speak on that, 99 of them essentially want to say the same thing. It is our meeting and we can control it.”

“I kind of agree, but when you’re talking about a subject that’s two months old, it gets a little repetitious,” Vainieri said of O’Dea’s remarks.

Commissioner Caridad Rodriguez (D-7) agreed, stating that she feels no one’s feelings or opinions are being ignored at this juncture.

Amy Torres, of the Hudson County Progressive Alliance, said that the county leaders are making at least part of their living off of taxpayer dollars and that their meetings would go smoother if the electeds were more responsive offline.

” … No one wants to stay on these meeting until 1 a.m., 2 a.m., 3 a.m., but what other courses of action are there for us? It should be easier than ever for us to engage you here in a remote environment … I don’t know what else you want from your constituents other than for us to shut up and leave you alone.”

Bayonne cop who fatally shot man with knife was responding to...

Due to error on public notice, Bayonne Zoning Board postpones mosque...