The City of Hoboken unveiled a new tennis mural honoring 1989 French Open winner Michael Chang, a native of the Mile Square City, and also announced the formation of a new advisory arts committee. 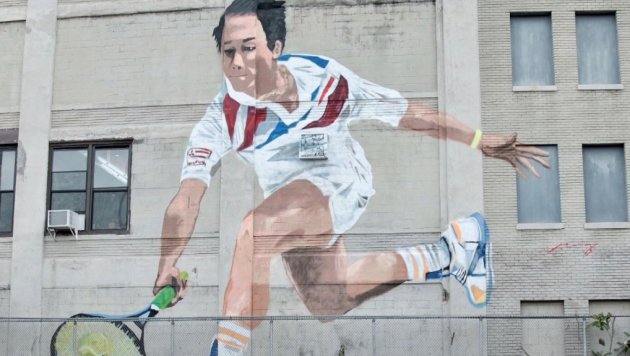 The mural, made by local artist Ricardo Roig, is the first piece of public art as funded by an executive order signed by Mayor Ravi Bhalla last year declaring that city bonds provide 1 percent for a public arts fund.

Bhalla also announced the launch of an advisory arts commission made up of residents and local artists, to help choose various public art projects to be funded through the new public arts fund.

â€œMichael Chang exemplifies Hoboken the spirit of firsts, as the first Asian American to win a Grand Slam tournament,â€ Bhalla said in a statement.

â€œHis grit and determination on the tennis court is artfully depicted by Ricardo, whose work is a source of pride and inspiration for our City. I thank Ricardo for initiating this mural, and his contributions which reflect the diversity of our community. I am proud of the many talented artists in Hoboken, and look forward to working the newly formed Arts Advisory Committee to further beautify our City.â€

Roig originally reached out to the city with the idea to paint the mural of Michael Chang, which was facilitated by Hudson County, County Executive Tom DeGise, and Freeholder Anthony Romano, who helped provide him access to the tennis court. This is his second mural in Hoboken.

â€œMurals are big but not necessarily for their size, itâ€™s in their spirit. Murals are larger than us- larger than life. They transcend time and help to tell the stories,â€ the artist added.

â€œThey inspire our daily life, and grow with our lives. As a solo artist who is normally working alone in a studio, murals help me to stretch out and work with others- like these wonderful individuals making policy better for our city, offering their time and talent to the greater good energy and nourishment we need as humans from the power of art.”

Bhalla also announced the formation of an advisory arts committee, established by executive order this week, to help allocate the funds from the one percent of all city bond ordinances set aside for public art installations.

Due to the passage of the bond to fund the Northwest Park, over $540,000 in funding is set aside for public art installations, including the $25,000 for the Michael Chang mural, which will be on the city council agenda on Wednesday.

Any resident or artists interested in serving on the Cityâ€™s arts committee is encouraged to apply by emailing a resume and letter of intent to Geri Fallo at gfallo@hobokennj.gov.

Once officially formed by the city, the committee will accept proposals for public art and recommend projects to be funded through the public arts fund, with approval by the city council.