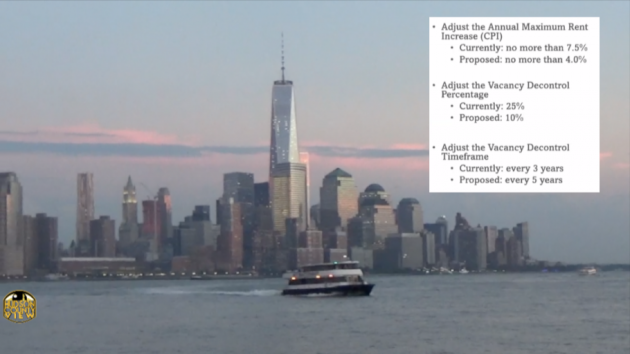 Last month, the governing body approved the first reading of a measure that would lower the annual maximum rent increase for rent-controlled units from 7.5 percent to four percent, explained Councilwoman-at-Large Emily Jabbour, who sponsored the measure with Councilman-at-Large Jim Doyle.

“I find the goal to be credible, but I find the fact that’s there’s no data is absolutely outrageous … This is the same nonsense, political nonsense, to simply buy votes.”

“Hoboken is a special place, but it’s not special enough to overcome pure economics: when you constrict the supply of something, the price goes up,” he asserted.

Tony Soares, a real estate professional and a former city councilman, was one of several who noted that trying to keep pace with how other cities operate doesn’t make much sense here.

“Before we’re going to compare ourselves to Jersey City, Union City, or Weehawken … If an apartment in Union City is renovated, it gets decontrolled,” he explained.

“… There’s a Western Edge plan that’s been approved that we’re stopping because [Mayor] Brian Stack wants to preserve his views,” he said of a Hoboken development currently tied up in litigation.

Later, Albert Buzzetti said that six of his 10 units have a monthly rent of $600 and have only gone up between $100 to $110 in the past decade, one example of why landlords should not be tasked with solving the affordable housing crisis in his estimation.

” … The deck is really stacked against the landlords quite frankly. Affordable housing should really be paid for by all taxpayers,” he noted.

“Ordinarily, I think CPI is a fairly effective tracker … I just think it’s interesting this proposal is being done after the COVID pandemic … There I think we need to a bit more understanding that this is not the time to make these changes,” noted resident Pavel Sokolov.

Furthermore, three tenants came out in favor of the measure, including Cheryl Fallick, a former member of the city’s rent leveling and stabilization board.

“Hoboken’s housing market and the overall issue of affordability and displacement is something that, for decades. administrations’ have been unwilling to properly tackle and this holds true to this very day,” she said.

“There are things that we could do to address the financialization of our housing stock if we are willing to meet the challenge. Perhaps through the tax structure, zoning and alternative housing models such as a Community Land Trust. Despite all of the controversy, I applaud the council members that put forward this ordinance. If nothing else, by doing that, they’ve demonstrated their awareness of the need to address something that has for too long been swept under the rug.”

Additionally, Jabbour noted they wouldn’t be voting on second reading at the July 20th council meeting and would likely wait until the fall to consider it.

Over 100 Hoboken residents take advantage of mobile DMV organized by...

Vainieri elected as county chair for 5th year in a row...