After already vocalizing support in a joint statement last month, Hoboken Councilwoman-at-Large Emily Jabbour is coming out emphatically in favor of the $241 million school expansion plan: ‘I am proudly voting YES for the high school referendum.” 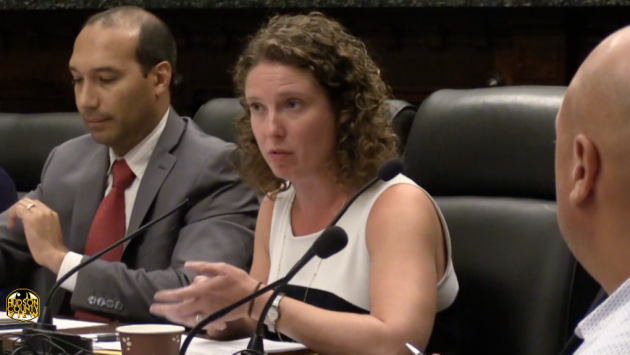 “I fully support our school community. I trust our amazing Superintendent Dr Christine Johnson. I do think our children deserve the best. And I am proudly voting YES for the high school referendum,” she said in an email blast this afternoon.

“This was not a difficult decision for me. The best education shouldn’t be only for those who can afford private schools. That’s not the community I want.”

She continued that it’s been six decades since the Mile Square City has invested in infrastructure for the public schools, claiming “now is the time to make this critical investment” since two elementary schools and one middle school are well above capacity.

The referendum would lead to an approximately $496 annual tax increase per household and includes amenities such as a new football field, ice skating rink, 27 general classrooms, and 11 specialized learning rooms.

The proposal has not been popular at public meetings or on social media thus far, which Jabbour said should be addressed by supporters at the polls.

“I know many of you are angry and have even felt insulted by some of what has been said, especially on social media – but to echo the words of President Obama: ‘Don’t boo. Vote!,'” she wrote.

“This construction project is not just about a new high school – it is about a long term vision that will benefit all Hoboken students and the larger community,” she told HCV.

Mayor Ravi Bhalla, Councilman-at-Large Jim Doyle, 5th Ward Councilman Phil Cohen, and Jabbour all said they were in favor of the plan on December 13th and the councilwoman has doubled down on her support here.

Her email blast came four days after 2nd Ward Councilwoman Tiffanie Fisher became the first elected official to come out against the referendum.

Fulop & Stack will forego public battle with Bhalla, hope to...