The Hoboken City Council had a contentious discussion on their municipal budget and also voted to expand their cannabis review board from three members to seven at last night’s meeting. 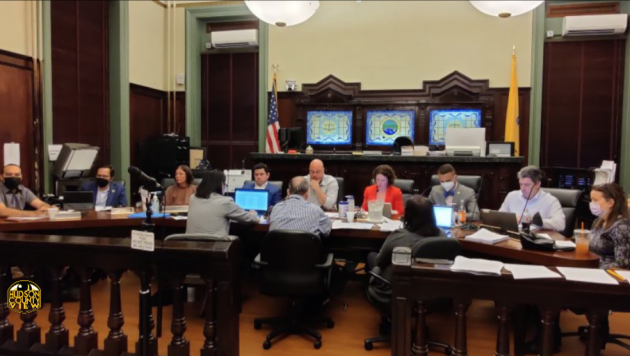 Councilwoman-at-Large Emily Jabbour, the chair of the finance committee, noted that certain council members had asked for the office of constituent services, the assistant executive director of the parking utility, the public safety director and his aide, and the director of recreation had been recommended to be cut to save money.

In April, the council unanimously approved the first reading of a $131,971,734 budget that came with a 5.6 percent tax increase with no discussion.

“The rationale is quite simple, actually: as many of you know, I’ve been advocating for $300,000 to begin a study process to rehabilitate the multi-service center. That was not included in this year’s budget,” said 4th Ward Councilman Ruben Ramos.

“It’s an item that’s been extremely important to our community for a while now. This started a couple years ago, unfortunately that process stalled and did not continue.”

He added that he wanted to allocate $65,000 to help the homeless population in Hoboken, noting that Jersey City and the county both already have teams to do so.

Jabbour continued that 2nd Ward Councilwoman Tiffanie Fisher wanted to eliminate both aforementioned public safety roles, as well as the director of housing, an associate from corporation counsel, and an employee from the mayor’s office.

Fisher replied that Jabbour was engaging in “political theatre,” since all council members were asked to find ways to tighten the budget.

“Right now, everyone has affordability issues: gas prices, food prices, etcetera. And it’s really incumbent on us to do everything we can to keep spending as low as possible,” she said.

She further stated that revenues, expenses, cash on hand, and total debt are all needed to do a comprehensive review of the spending plan, none of which were provided, with the exception of the debt service number that was provided about two hours before the meeting.

As a result, Fisher indicated that all new hires should be scrutinized.

Jabbour then asked Public Safety Director Kenneth Ferrante to address possible cuts, to which Ramos asked if the finance committee was comfortable with a 5.6 percent tax hike.

Jabbour said that they had already come up with reductions, to which Ramos asked why the council hadn’t been informed of those. She said they could also be discussed, but Ferrante had been given the floor. He took aim at both Fisher and Ramos.

“Are we talking about dollars and cents or are we talking about things that are about politics and political? This is a unique one about me being called up because it’s about my position. It’s not about cuts to the public safety division and as a police chief I brought forth seven budgets, every year we acted within the budget,” Ferrante stated.

Ferrante said that Fisher told him a lot of people are unsure what he’s doing in his new role, which was vacant for several years, to which he replied that administrative responsibilities are being taken from Acting Police Chief Steven Aguiar so that he can focus on running the department.

He also said a new table of organization was being introduced for the fire department, which would help boost morale and bring more structure, also noting that his track record and experience will lead to big cost savings in the foreseeable future.

Furthermore, Ferrante noted that the cuts proposed by Ramos and Fisher would only save the average taxpayer $4.53 for the year.

Jabbour was then prepared to call up Director of the Division of Transportation and Parking Ryan Sharp, but Ramos asked Council President Mike Russo if they would be voting on the budget this evening.

Once he clarified that they were not, Ramos asked if they could move along to agenda items that required a vote.

Jabbour said that several council members did not participate in the budget hearing, Russo noted that he wanted transparency, but would leave it up to his colleagues, though after about 10 minutes of arguing, he opted to move on instead.

To that end, the ordinance, sponsored by 6th Ward Councilwoman Jen Giattino, to expand the CRB to seven members would allow the council to select two members of the public, with Mayor Ravi Bhalla able to choose two more.

Currently, the CRB is chaired by Russo and the only other members are Business Administrator Jason Freeman and Health and Human Services Director Leo Pellegrini.

“It’s just going to add four people to the panel. It’s good for the transparency of the panel. It shouldn’t be political positions. It should just be members of the public,” Manny Solar Rivera said.

“I rise in full-throttled support of cannabis. To say the town will change, it has changed. It will change again. I haven’t necessarily been thrilled with all the changes we’ve had. I hope the city council will vote unanimously for the ordinance that’s on second reading,” noted Cheryl Fallick.

However, she also said she felt the current nature of the Community Host Agreements (CHAs) are “shady,” as did Sheila Brennan.

“I wasn’t aware of these host agreements. But an applicant coming before our government … is encouraged to donate to any cause he’s asked to do. It just smacks to me of quid pro quo. It blew my mind that they could actually be asked. It just struck me as wrong on so many levels. Hoboken is known for corruption. It should be open to the public.”

While Jabbour had proposed an ordinance expanding the board to five members, she ultimately removed it from the agenda before the vote.

Fisher noted that the six dispensaries approved by the CRB could fail, and thus the board would exist to manage their replacements like the Alcohol Control Board (ABC).

“I don’t see why having interested residents as part of community boards isn’t a good thing. I urge everyone not to demonize cannabis,” added 1st Ward Councilman Mike DeFusco.

“As for the host agreement, I don’t think it should be brought up at the cannabis review board. The mayor is going to negotiate it any way. Let’s vote on this as it is,” Giattino said.

The measure passed unanimously on second reading (9-0) to great applause from the audience. This makes Hoboken the first municipality in Hudson County to expand their CRB to seven members.

Inmates at county jail in Kearny join DeGise and Reber in...