The costs of the City of Hoboken’s healthcare benefits plan, six labor union contract agreements, and generating new revenues are a few of the biggest issues heading into a budget season facing a multi-million dollar budget gap. 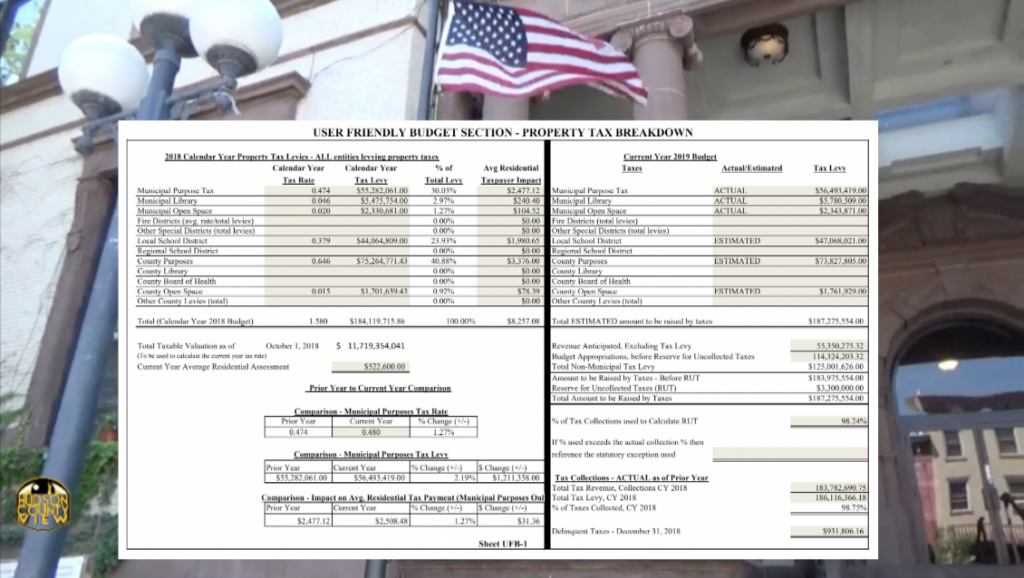 “First, the City’s actuary has analyzed the projected cost of employee medical benefits for 2020 and expects there to be a 7.3% increase in medical costs ($1,413,450) over 2019,” Hoboken Business Administrator Stephen Marks wrote in a December 17th letter to Mayor Ravi Bhalla.

Marks’ comments are not particularly surprising for those that have been following Hoboken’s budget woes, as he noted in the beginning of the year that a roughly $7 million shortfall could lead to 80 layoffs.

This morning, officials sat down with reporters at City Hall to answer questions about the budget for over an hour.

â€œThe narrative that being put out there that our philosophy is to spend now, worry later is just false. Itâ€™s just not true,â€ said Jason Freeman, the director of operations for Mayor Ravi Bhalla.

He will split business administrator duties with Caleb Stratton on an interim basis once Marks leaves Hoboken for Kearny on February 16th.

“We are doing as much as we can to stress alternative funding option knowing that itâ€™s difficult to put more spending in the budget,â€ added city spokesman Vijay Chaudhuri.

Many of the particulars discussed were outlined in the aforementioned letter by Marks.

For example, Marks estimates that “expected contractual personnel costs” is $5,691,795. That includes $3.2 approximately million to settle all labor contracts and $2.5 million for salary adjustments.

A little over a million dollars should be allocated for police, firefighter, and civilian employee unions for their respective contracts that span between 2018 and 2020, Marks wrote.

Revenues have also dropped in areas such as the municipal court, down $400,000, and the parking utility, down $600,000, while solid waste disposal fees have increased $100,000, officials explained earlier today.

While this year’s budget will inevitably also come with a tax increase, most residents and electeds alike have expressed a greater concern about layoffs.

Chaudhuri said that these decisions were taken seriously and included hours worth of deliberations with city directors, further stating and that the full list of employees would only be laid off in the worst case scenario.

“All things are contingent on ‘are we able to have successful concessionary bargaining with the unions? Are we able to move forward with new revenue generators?’ Laying off 79 people is the worst case scenario,” he stated, again emphasizing that healthcare costs and contract negotiations are a swing of millions of dollars for the city.

According to state Civil Service guidelines, a layoff-plan needs at least 75 days to be implemented: 30 days for civil service to review the plan and 45 days notice issued to each employee being laid off.

Furthermore, a temporary hiring freeze went into effect as of January 6th, according to another letter from Marks to Bhalla.

While the dollar amount available in the Open Space Trust Fund, this account has been pivotal to help fund park construction and improvements, as well as litigation on matters such as Union Dry Dock, according to the mayor’s office.

Additionally, Freeman notes that $2.48 million was spent on salaries for offices of the mayor and business administrator, as well as corporation and outside counsel, in 2016 – compared to $2.2 million in 2019.

Freeman served in the deputy chief of staff post, which has since been eliminated, before he took over as director of operations – a new position in the mayor’s office.

Bhalla also no longer has a chief of staff, with John Allen now serving as assistant corporation counsel.

Both Chaudhuri and Freeman said that it was too early to calculate the tax increase and/or layoffs without a preliminary budget, which should be released in the next week or two.

1st Ward Councilman Mike DeFusco, one of four electeds who voted against parking increases last week, chided the administration’s layoff plan and called on them to replace Fairview as their insurance vendor if they’re serious about saving money.

” … 79 hard working men and women are facing the very real possibility of having their lives flipped upside down with impending layoff notices. We are talking about eliminating the income for young families, single parents and long time employees, some of whom have dedicated themselves to helping Hoboken residents for decades,” he said in a statement.

” … We can no longer look the other way as this administration continually puts politics and personal agendas over good and transparent local government.”

Fairview Insurance had ties to a super PAC that supported DeFusco’s opponent in the November ward council races.