Hoboken American Legion Post 107 received $225,100 at the groundbreaking of their veterans center this afternoon, a facility currently houses six veterans and will eventually be called home for a dozen more. 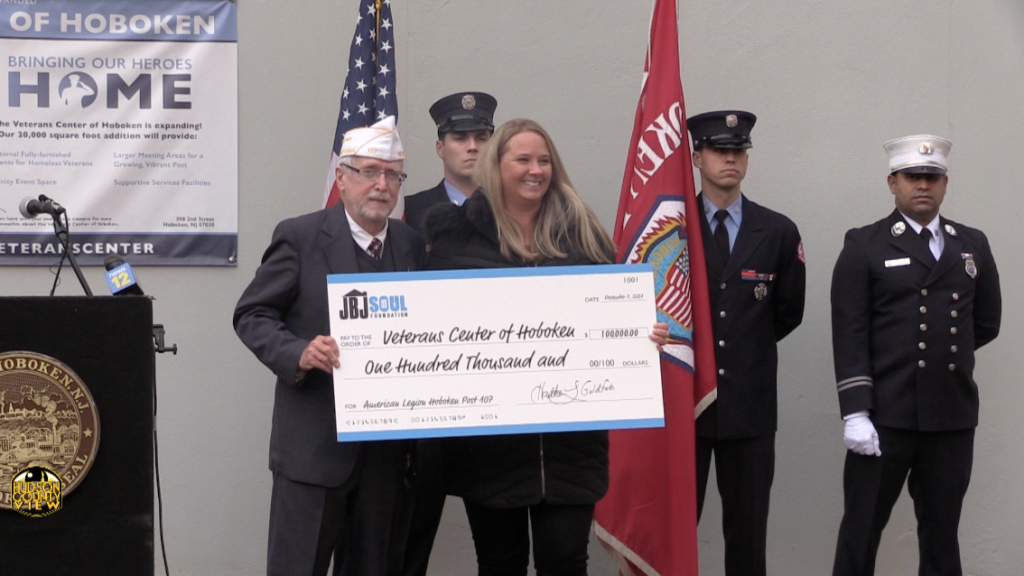 During the roughly half hour ceremony, New Jersey American Legion Commander Daniel Dunn reminded everyone that today is the 80th anniversary of Pearl Harbor, later stating that currently 22 veterans commit suicide daily – one key reason why this project is so important.

Located at 308 2nd Ave., the project is expected to be completed by next summer, about three years after the initial ribbon cutting.

“This is the one project in the history of the City of Hoboken, that I’m aware of, where there’s complete, 100 percent consensus support,” said 5th Ward Councilman Phil Cohen, who spoke on Mayor Ravi Bhalla’s behalf.

“The people of Hoboken love this project. It’s important, it’s valuable, the neighbors want it here: these heroes deserve a place to live [and] they’re going to get one.”

Post 107 Commander John Carey reminded those in attendance that donations of any amount for the project can be made at hobokenlegion.org/give.

“They will take anything up to $2 million,” Carey jokingly said before County Executive Tom DeGise took the podium.

DeGise echoed Cohen’s sentiment that this is a rare project that has near unanimous support.

“What a no brainer this was here to do this. I remember when [Hurricane] Sandy hit to see the damager … and to see it now and see its completion with six units – and 12 more units coming on board – I couldn’t be more thrilled and I’m very, very thrilled to be here,” he stated.

The big donations of the day came from the Jon Bon Jovi Soul Foundation and Hoboken Grace Community Church, who gave $100,000 a piece.

We are so proud to be partners of this new housing project: this will not only create a safe space for veterans to call home, but also deliver important, life-saving services at the same time,” said JBJ Soul Foundation Executive Director Heather Goldfarb.

“Keep up the great work, to all of our veterans: you are loved and appreciated,” stated Hoboken Grace Church Pastor Chris High.

The additional $25,100 came from legion members, while The Sudler Foundation gave an undisclosed dollar amount yesterday.

“Today, December 7th, is a day of 80 years – and forevermore – a tragic day. But I think December 7th, today going forward, is going to be a day of rejoining because it’s a day we started completing the second phase of our project,” stated Mark Villamar, the finance officer for Post 107.