Santacon, the annual holiday-themed bar crawl in Hoboken, yielded a whopping 521 calls for service this year, though arrests were down to eight after 14 individuals were charged last year. 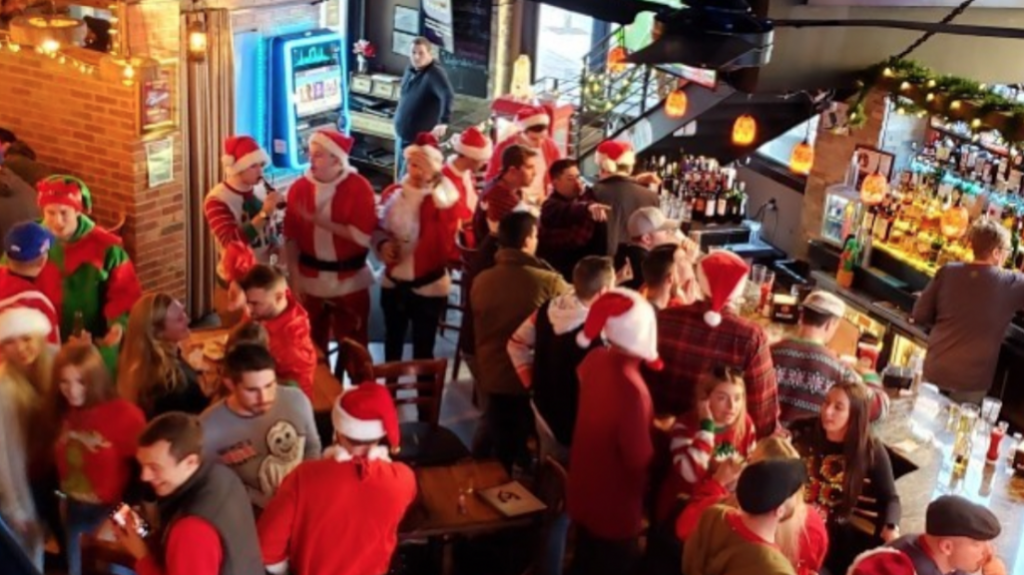 “Between 8am Saturday & Sunday 4am, police responded to 521 calls for service (up from 429 in ’18 due to larger call volume earlier in the day & a deployment that was 4 hrs longer, both yrs averaged over 26 calls per hour),” Police Chief Kenneth Ferrante tweeted yesterday.

According to Police Det. Lt. Edgardo Cruz, six of the eight arrests involved driving under the influence and/or intoxicated, with one incident that involved assaulting a police officer.

While patrolling the area of Newark and Washington Street, Officers Anthony Olivera and Harold Milne detected the odor of burnt marijuana and they observed the defendant holding what the believed to be a marijuana cigarette.

They approached him and were able to retrieve the cigarette, which they confirmed contained marijuana. Police then attempted to place him under arrest.

However, Bach pushed Olivera away to prevent being handcuffed. The officers continued to struggle with the defendant, he kept resisting being handcuffed. At one point, all three men fell to the ground during the struggle, injuring Olivera, officials said.

As they attempted to gain control of the defendant, he bit an aiding Union City police officer’s hand. Bach was eventually placed in handcuffs and placed inside the vehicle.

Even then, he continued to resist by kicking the door and slam his head against the partition, causing a laceration to his head. He was transported to headquarters where he continued by spitting blood all over the area, police said.

He was eventually transported to the Hoboken University Center for treatment. The officers completed all the reports and served the defendant with a summons to appear in court and both officers who were injured remained on duty.

Ferrante, whose department saw four officers injures last year, chided the event organizers for trying to pass the bar crawl off as a charitable event.

“The organizers & participating bars set up a wristband (at a cost) system w/drink specials & try to publicize the event as a “charity” event, urging those coming to the city to bring toys for underpriviledged [sic] children,” he tweeted.

According to the Santacon event page, “Participants are invited to bring new toys or donations to help a child in need this holiday season.”

In a web exclusive released yesterday, Last Week Tonight host John Oliver took aim at the Mile Square City bar crawl (though the segment was filmed before the latest statistics were available).

“Just think about that: ‘Arrested doing SantaCon in Hoboken, New Jersey.’ That might be literally the saddest sentence in existence,” Oliver said in the YouTube clip.