Romano told HCV that he hoped the HCDO would support his re-election bid in June: something they didn’t do in 2014, but then put him on the part line again in 2017.

Given those who spoke at Wille McBride’s in front of a crowd of around 125 people, Bayonne Mayor Jimmy Davis, Hudson County Sheriff Frank Schillari, County Executive Tom DeGise, and HCDO Chair Amy DeGise – the odds appear to the in the incumbents favor this time around.

“Stick has committed and dedicated himself to being a great freeholder and a great representative, but his better role is the number 1 fan for Hoboken. He is Hoboken’s biggest fan and strongest supporter and he makes sure that they constantly have representation and a seat at the table,” Amy DeGise said during her remarks.

“And we joke about you being a twin or a triplet, being able to make all these events, but it’s because it’s high highest priority to highlight what the community is doing – whether it’s law enforcement, whether it’s a charitable or religious service, for another elected official: he wants to be able to represent himself and the county.”

In an interview, Romano said that he plans on prioritizing a number of public safety initiatives throughout the county if he is elected to serve through 2023.

“We have the county correctional facility going through changes, you have the expanded duties of the sheriff’s department, the roadways – Hoboken has the most roadways of any city, we [also] have our county schools that continue to grow,” he stated.

While petitions of nominations aren’t due until the tail end of the first quarter of 2020, rumors persist that Romano will face at least one Democratic challenger from the Mile Square City, a former member of his inner circle, this time around.

Nevertheless, Romano seemed undeterred about the possibility of having to defend his seat against a game opponent this upcoming summer.

“I was always was taught by two people, Senator [Bob] Menendez and Pablo Fonseca, my campaign manager, to always run as the underdog and to give it your all constantly, 100 percent. And it’s a free country: anybody can run that wants to run.” 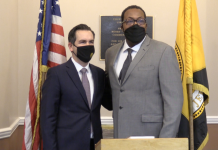 LETTER: Thank you for allowing me to represent you in the...