Groups clashed over potential privatization of Liberty State Park during the latest meeting hosted by the New Jersey Department of Environmental Protection to discuss plans for cleaning up the interior of the park. 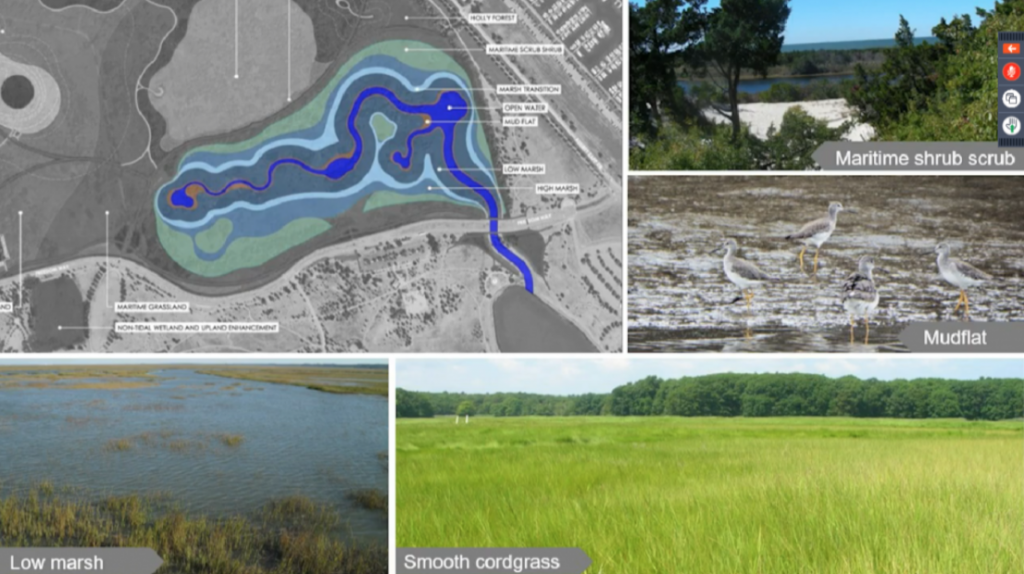 The polluted, unused land in the interior of Liberty State Park (LSP) will be converted into active recreation areas and it was noted the park will receive funding through the state legislature for the construction.

NJ DEP Deputy Commissioner Olivia Glenn moderated the webinar, as she has throughout this ongoing series.

She emphasized they want to hear stakeholder voices and also pointed out that construction is likely to begin early next year after the extensive pubic comment process is completed.

Environmental Specialist Stacey McEwan gave a presentation on the progress made thus far. She noted they haven’t decided on a specific plan for active recreation yet.

McEwan explained that tidal wetlands will be a focus of their efforts to address climate change as it helps cope with storms and run-off water.

“I was vey impressed with the presentation tonight,” Assemblywoman Angela McKnight (D-31) said, citing pictures of children playing and animals grazing in their natural habitats. She also commended Glenn and her team.

“Recreation is coming to Liberty State Park, and the community members are all board. I look forward to actually being able to enjoy this space and being able to take my grandson.”

She called it a ‘historic movement truly involving everyone from all walks of life.”

Keith Bodden, of the New Jersey NAACP’s veteran’s committee noted it was the birthday of Rosa Parks. He said regarding Liberty State Park’s expansion and clean air will help veterans and the public.

“We’d like to see the park continue as open and not invested in by private sector golf course.”

Friends of LSP President Sam Pesin said they have represented the 90 group coalition, along with tens of thousands of people, who want the park to remain protected and opposed privatization.

“Every green tree is far more than glorious than if it were of made of gold and silver,” he said, quoting Martin Luther King Jr.

“Nature is for everyone,” Pesin added.

Additionally, Liberty State Park for All Executive Director Arnold Stovell praised the presentation and the efforts of the NJDEP.

“I’m also heartened to see the recreation being considering balances nature while understanding the needs of the community,” Stovell said.

However, he was critical of those who spoke out against privatization in a statement issued after the meeting.

“Those who don’t want active recreation in Liberty State Park’s Interior only care about what they want, not what the community wants. They know this mix of active and passive recreation in the Interior is possible even though for decades they fought against it.”

Furthermore, David Case, of the Hudson County Sierra Club, said it’s “heartening to see the team has a done a great job. It’s a shame Fireman’s money has interjected a whole other issue into the debate.”

“This is our Yosemite. This is our Grand Canyon. You wouldn’t chop off half the mountains. All ages, all demographics, every race, every creed can appreciate and benefit from time in nature.”

The hits went both ways though, with former Mayor Gerry McCann, who nows works for the city’s Department of Public Works, who targeted Pesin during his remarks.

“Too much of the talk is about a golf course … Sam Pesin doesn’t represent the people of Jersey City.”

McCann also complained about goose droppings at the park extensively.

To that end, Case said it was “disingenuous” to hear McCann say the Liberty National Golf Course, which at one point last year tried to expand into the Caven Point portion of the park, wasn’t an issue here.

“Your process is being high jacked by Mr. Pesin … We are not talking about the LSP Protection Act,” he exclaimed.

Still, many other speakers managed to stay out of the fray.

Tim Dillingham, of the American Littoral Society, which protects marine life and habitats, said they worked with the department on coastal restoration and praised the presentation.

“There’s not a lot of green space left for us. Attracting nature-loving people is a key environmental justice challenge,” he said.

“Ecological restoration stitches together the tremendous mosaic that reflects natures before we started to pave it all over,” Dillingham said. However, he complained that devoting 25 acres to parking was a bit too much.

Other state officials interjected to discuss other considerations that will be key for this project.

“We have absolutely go to take climate change into the process,” said the NJ DEP’s Chief of Natural Resource Restoration Dave Bean. He noted high marshes protect against the rise of the sea level.