West New York’s part-time building inspector Manny Fernandez, who has four other jobs, earns just under $82,000 a year, but surveillance footage calls into question whether or not he is earning his WNY salary.

Fernandez, who served as the townâ€™s acting construction official between 2012 and 2014, remains with the town as a building inspector.

He does not receive health or medical benefits from West New York and also earns part-time wages from Guttenberg, Secaucus, Rutherford and Fairview – netting him roughly another $45,000 a year.

None of the other municipalities had a set schedule established for Fernandez, who comes in on an as needed basis.

On multiple occasions in July and August, East Coast Private Investigations followed Fernandez on a typical West New York work day, revealing that while he punched in and punched out on time, there was rarely any actual work being performed.

Surveillance footage forwarded to Hudson County View showed Fernandez routinely sitting outside town hall, eating breakfast at a restaurant and performing no more than three inspections in a morning – in one instance, inspecting a home in Guttenberg while on the clock in West New York, according to Joe Blaettler.

Blaettler, the president of ECPI, confirmed with Hudson County View that his company performed the investigation and questioned if the building inspector position was really needed in West New York.

He declined to comment on if he believed Fernandez should face disciplinary action based on the surveillance, also declining to reveal who hired him to perform the work – citing client confidentiality.

Town spokesman Pablo Fonseca said the situation is a â€œpersonnel matter,â€ with any hint of impropriety coming via unproven allegations.

“This is a personnel matter and our policy is not to comment on personnel matters, but if the (private investigation) company wants to file a complaint with the business administrator, they have the right to do that,â€ Fonseca said. “Right now, everything being said is an allegation.â€

Fernandez did not return a call or voicemail seeking comment.

Editor’s Note: While Fernandez does not receive health benefits from West New York, he does receive an additional $5,000 stipend at the end of each year.

With Hudson set to exit ICE contract, NYIFUP calls for release, not transfer, of detainees 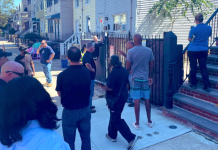