While Hoboken Mayor Dawn Zimmer continues to support a new deal with Suez Water, previously stating it would bring $40 million worth of benefits to the city, it appears that the measure will most likely be voted down by the council. “Given that the proposed agreement would provide $31 million for urgently needed infrastructure upgrades, I ask the City Council take a vote on this issue at their meeting next week so that my Administration can move ahead accordingly,â€ Zimmer said in a statement.

â€œUnder the existing agreement, the City – and by extension every taxpayer â€“ is responsible for excess repair and bulk water costs. Ultimately, that means residents are footing the bill for car washes or laundromats that use millions of gallons of water, while the proposed agreement would make ratepayers responsible for their own water usage.â€

According to Zimmer’s office, the current agreement through 2024 only requires Suez to make $350,000 per year in capital investments in the water system â€“ less than the amount needed to make emergency repairs.

Also under the existing agreement, the city is responsible for repairs exceeding $350,000 per year, as well as excess bulk water costs as of 2014.

Furthermore, the cityâ€™s current liability to Suez under the existing agreement is $8.35 million and is estimated to total $17.8 million through 2024.

Meanwhile, the proposed agreement would extend the contract through 2034, forgive the existing liability, and provide an estimated $31 million investment in Hobokenâ€™s water system.

The proposed agreement would also shift bulk water and capital repair costs from the taxpayer to the ratepayer.

Despite these facts, the majority of the council has indicated they will be opposing the resolution at Wednesday’s meeting.

“During our review and discussion of the administrationâ€™s prepared responses, we expressed additional concerns about the proposed contract. And we requested again to be provided with the detailed financial analysis supporting the proposal,” Council members Jen Giattino, Tiffanie Fisher and Pete Cunningham said in a joint statement.

“In correspondence the following day, we recommended to the administration the following next steps prior to having the City Council vote on the proposed contract: to have a subsequent subcommittee meeting to address the concerns we have raised and for the Administration and its consultants to meet with the entire City Council during an executive session to discuss the proposal in detail.”

The trio of council members added that both meetings have been scheduled for next week, stressing a need for “full transparency” before agreeing on “a critical and long-term financial operating contract for Hoboken.”

4th Ward Councilman Ruben Ramos, a longtime nemesis of Zimmer, was less kind when explaining his concerns had not been met, though applauded the mayor’s former council allies for taking a stand on this issue.

“We still have a number of years left on this deal, so we have no real urgency to move this forward right now. I havenâ€™t received any new information since the last council meeting, Iâ€™m not even sure if the committee met,” Ramos said over the phone.

“As far as Zimmer goes, sheâ€™s a lame duck mayor: she had eight-and-a-half years to push an agenda and sheâ€™s going to try legislate now? Iâ€™m just glad her former council allies realizes sheâ€™s a wolf in sheepâ€™s clothing.”

â€œObviously we need a better contract, but the contract put in front of us doesnâ€™t seem to be better in any facet other than itâ€™s going to put more money into maintenance. Unfortunately, the maintenance money seems to be on the backs of the taxpayers,” Mello stated.

“Theyâ€™re a publicly traded company and theyâ€™ve had a sweetheart deal for some time now and it doesnâ€™t shift much of the burden onto them … I think weâ€™re keeping the window opportunity for a true option for Hoboken and itâ€™s important not to lock in another negative contract for the Hoboken taxpayer and the Hoboken ratepayer.”

In the event that the measure is voted down, Zimmer’s allies will inevitably accuse the council of playing politics.

Giattino is running for mayor, with Fisher and Cunningham serving as two of her biggest supporters, Mello is seeking re-election on Freeholder Anthony Romano’s slate and Ramos has been one of the most vocal backers of 1st Ward Councilman Mike DeFusco’s mayoral run.

The proposed agreement was introduced at the July 11th council meeting ad was expected to be voted on at the subsequent meeting on August 3rd.

While the matter was tabled last month, Ramos and DeFusco sparred with Councilman-at-Large Ravi Bhalla over whether or not he had a conflict of interest since his law firm represents Suez.

In an email obtained by Hudson County View from Bhalla sent to Zimmer, the council and Business Administrator Stephen Marks, the mayoral candidate says he will be recusing himself from Wednesday’s vote on the Suez contract – despite the fact DeFusco presented many falsehoods at the previous council meeting.

“I have zero personal or financial interest in the MOU and the subject matter therein, beyond being a water customer of Suez by virtue of my residency in Hoboken and the fact that water is supplied through this utility, an interest shared by virtually all residents in the City, all Council members and members of the administration residing in the City,” Bhalla wrote in yesterday’s email.

DeFusco and Bhalla did not return immediately return inquiries seeking comment this morning.

“I hope the Council will support the agreement since it is in the best interests of our City. Rejecting the contract is the Councilâ€™s prerogative,” Zimmer began in a follow-up statement addressing the possibility of the contract being voted down.

“However, failing to vote and instead expressing their concerns and opinions through the press would be an abdication of their jobs, clearly putting politics ahead of the vital interests of Hoboken residents. I trust that the City Council will do their job and take a vote so the City can move forward with this contract or with another alternative.”

The Hoboken City Council will meet at City Hall, 94 Washington Street, at 7 p.m. on Wednesday. 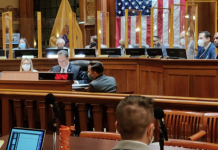