While the odds heavily favor U.S. Rep. Albio Sires (D-8) in the June 2nd primary election, Democratic challenger Hector Oseguera seems confident that an upset is in the cards. 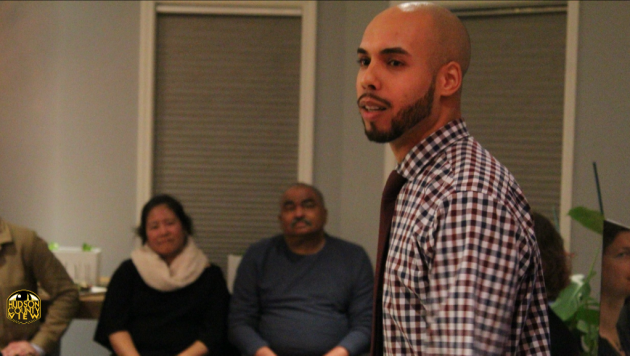 At a meet and greet event held in Hoboken last night, Oseguera said that he was motivated to run against Sires as a staunch progressive to push for initiatives typically linked to liberal Democrats.

Above all else, Oseguera said that passing legislation to make healthcare, housing, and other basic needs more affordable to middle and lower class people of his district would be his top priority.

“I want the prosperity of our working class community that I saw here as a kid to keep going,” Oseguera said.

“I see high rises going up, and developments that no one can afford. I’m an attorney and I can’t afford it. I think about the people that grew up here and work blue collar jobs. How can they afford to stay here? They have a right to share in the prosperity of our district, but it’s so hard to reach a decent standard of living.”

Inspired by the 2018 election of Alexandria Ocasio-Cortez, 30, to as the Bronx’s congressional representative, Oseguera believes that a similar political upset is possible on the other side of the Hudson River.

“Ethnically and demographically, the eighth district is nearly identical to 14, and we face so many of the same issues,” Oseguera said.

He faces a formidable opponent in the incumbent Sires, a former West New York mayor, state assembly speaker, and congressman since 2006.

The incumbent has crushed every challenger thus far with no less than 77 percent of the vote in any 8th Congressional District primary or general election, and showed he still wields considerable influence on the local level by playing a pivotal roll in getting Gabriel Rodriguez elected as the mayor of West New York last year.

Sires also fundraised $290,509 in 2019 ahead of a re-election bid for his ninth term, compared to Oseguera’s $5,781, according to filings with the Federal Election Commission.

Furthermore, Sires has approximately $226,155 on hand, while Oseguera only has $1,097 to spend from his campaign account.

In all of his past congressional elections as an incumbent, Sires has received over half a million dollars in contributions from building, labor, and trades unions, along with the Desert Caucus, a PAC aligned with strengthening U.S. support for Israel.

Oseguera said that while his fundraising operation as a first-timer might not compare to that of Sires’, he remains confident in people power.

“We have a very insular and protected political class here that doesn’t show enough concern about what’s going on at the ground level,” Oseguera said.

“The fact of the matter is that money can’t vote. People vote. This house is full of people right now, and I invite anyone to try to get face to face with my opponent the same way that they can meet me here. The machine projects strength, but they’re weak. They rely on a small subset of people that vote regularly, but the everyday person is getting more hip to their game, and they’re sick of the machine.”

With all that in mind, it’s academic that Sires will run on the Hudson County Democratic Organization line, with the same treatment expected throughout the district (which also includes Belleville, Fairview, Elizabeth, and about half of Newark).

While Oseguera realizes the potency of the Democratic establishment he’s contending with, he believes a grassroots movements still has a chance to make impact.

“I’m from West New York, and he was my hometown mayor. I have nothing against Albio personally, I’m sure that he’s a great man. I’m sure that he’s an affable person who I could get along with. But, he’s a seminal member of the old boys’ club. He doesn’t show up in the district to hold town halls, and I don’t think he ever will,” he stated.

“I think it’s important for there to be a challenge in any election, and that’s my reasoning when people ask why I’m going up against this ‘unbeatable Hudson County boss’ as so many people want to describe him.”

Oseguera is another of many faces in what observers view as a recent progressive movement rallying against the mainstay Democrats in Hudson County.

For example, congressional candidate John Flora, a Jersey City teacher, is taking on U.S. Rep. Donald Payne Jr. in the state’s 10th district with a similar plan of action.

In conclusion, Oseguera said that he believes that while more individuals on the left have been challenging incumbent democrats across the county, the conflicts within the party are consistent with those in national politics.

“I might be a bit controversial here, but I don’t think the left and right are relevant political distinctions in America anymore,” Oseguera said.

“It’s about whether you represent grassroots, or elite special interests. I won’t be co-opted by the machine because I will never take their money, period.”

LETTER: While Jersey City IZO is a step in the right...