State Senator Sandra Cunningham, Assemblyman Nick Chiaravalloti and Assemblywoman Angela McKnight, all of the 31st Legislative District, have sent a letter to the A&C Bus Corporation urging them to keep their route from Greenville to the Newport Centre mall.

“Over the weekend, we learned that the # 4 bus line, which operates between Merritt Street and Newport Mall, will be shutdown effective March 2, 2019,” the three legislators wrote in a letter to the A&C Bus Corporation on Monday.

“This bus-line is crucial as it connects the residents of the Greenville and Bergen-Lafayette neighborhoods to downtown Jersey City.”

The company’s website uploaded a letter confirming that rumors of the No. 4 bus line being cancelled are true, providing little explanation.

“Attention passengers: Due to low ridership, Effective March 2, 2019, we will no longer be operating the No. 4 Line. Thank you for your patronage.”

In the letter, the lawmakers pushed back against the notion that the No. 4 wasn’t being utilized much.

“Your company has stated that the reason behind discontinuing this line is due to low ridership. This past Tuesday we (Assemblymembers Chiaravalloti and McKnight) rode the 6:50am bus to hear from commuters,” they wrote.

“On that bus ride there were well over 50 passengers on board – standing room only. For many of the riders, the #4 is the only option for transportation to school and work.”

They continued that discontinuing service to the Greenville and Bergen-Lafayette “would have a devastating impact on the community” since it the only direct connection those residents have to Downtown Jersey City.

“Again, we are urging you reconsider your decision. The livelihood of a large section of Jersey City relies on this single bus – cutting its operations would have unforeseen complications,” the letter concludes.

A man who answered the phone at the A&C office this afternoon said that they wouldn’t be commenting on the letter before immediately hanging up. 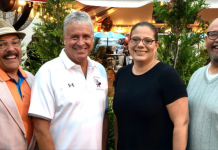