A Zoom forum on the Jersey City Master Plan was held by the city’s planning division last night where officials explained the process for potentially updating and expanding their vision in the coming months. 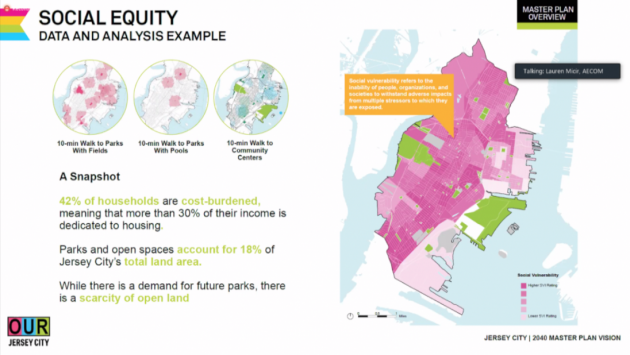 The master plan for the city typically gets updated every 20 years and Jersey City Planning Director Tanya Marione noted that the last time an update occurred was in 2000.

Marione explained they are in the data gathering phase of the Master Plan process which began in March and will run through August 2021, where a final revised Master Plan will presumably be adopted.

More events where community participation is encouraged will be held in the coming few days, including one on Saturday at Berry Lane Park.

The director also said the master plan provides a strategic vision to guide policy over the next two decades. She said they wish to revise open space and incorporate housing data in the new master plan.

Jersey City seeks to create a community-wide land-use guide that sets a vision of growth, revitalization, and preservation, said Lauren Micir, an associate at the engineering firm AECOM.

“Community input is key to this process,” she added.

Micir continued that the master plan is used to identify priorities, understand their projects, and where business investors can see where the city wants to make investments.

Residents can use the master plan to hold the elected officials accountable“so we make sure we stay true to our community vision,” she stated.

Furthermore, master plans signify where in the city commercial growth should be focused, as well as whether or not to adopt measures to cope with climate change. Thus, they want to predict where flooding could occur to prevent it, Micir explained.

Planning consultant Brie Hensold pointed out that the city really wants to emphasize open space in the plan. She noted the palisades cliffs greatly impacts the master plan in terms of planning for population growth and environmental issues.

Mallory Clark-Sokolov, also of the City Planning Department, said there are many opportunities for the city to redo plazas that are not being full utilized for the public.

“If you are finding yourself in an open space in Jersey City you like, try to figure out why,” Planning consultant Abby Jamiel, of the firm Agency, Landscape + Planning, said since they are eager for community feedback.

Jamiel also noted that the city is seeking the redevelopment of the Hackensack riverfront on the west side of the city, where there is less open space and green space than on the east side.