Citing “massive vote-buying operations,” Hoboken Mayor Ravi Bhalla has vetoed an ordinance that would allow voters to decide whether or not to bring back runoff elections – making him the second Mile Square City mayor to do so in the last month.Â 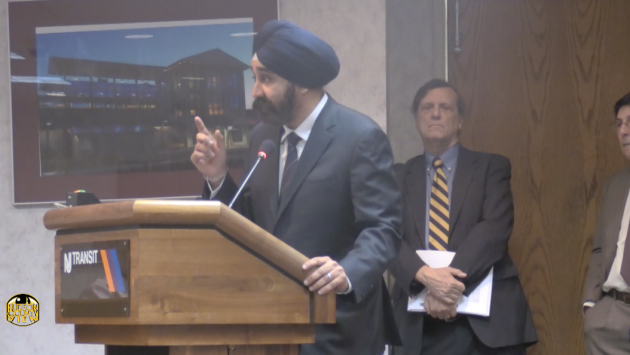 “The open secret known by every single member of the City Council and alluded to in multiple local news reports is that there is massive vote-buying that occurs in our elections,” Bhalla wrote in his veto statement.

“Reducing voter turnout through runoffs in December will amplify the power of those vote-buying operations, making our elections less democratic. Therefore, the approach taken by the City Council in achieving this objective is highly misguided and amounts to poor public policy that I cannot support.”

BhallaÂ goes on to say that while he does not support traditional runoff elections, he does support instant runoffs – a measure that would have to be approved by the state legislature.

He also pointed to the low turnout in Jersey City’s runoff elections as an example of why runoffs are ineffective.

One of Bhalla’s running mates, Councilwoman-at-Large Emily Jabbour, introduced a resolution last week urging the state legislature to implement instant runoffs, but it ended up being tabled for further discussion.

Also last week, the Hoboken council, for the fourth time, to add a runoff question to the November ballot, allowing voters to decide if December elections would be revived for 2019 and beyond.

That vote came after former Mayor Dawn Zimmer vetoed the council’s first effort to get the question on the ballot in her last major legislative act as mayor.

In her veto statement, sheÂ wrote off the effort as a way to undermine Bhalla’s authority as mayor – he won the mayor’s seat with about one third of the vote, far less than the 50 percent required to avoid a runoff election where they are applicable.

Ramos, the current council president, expressed frustration about the latest veto when reached by phone.

“Additionally, the last time Hoboken had runoffs in 2009, voter turnout actually increased for the runoff.”

Ramos said that he plans on speaking with Corporation Counsel Brian Aloia on how to proceed with a veto override.

DeFusco, who swung at Bhalla hard throughout the mayoral race, was less kind in his reaction to the veto.

“It is disappointing to see Mayor Bhalla not just deny Hoboken residents the opportunity to have their voices heard in a public referendum on our voting rights, but to also see him spread misinformation and half-truths while doing so,” DeFusco said in a statement.

” … This issue should be decided by the people, not by entrenched, establishment politicians like Mayor Bhalla who benefit from a flawed current system. The Mayor cites reduced voter turnout in a recent Jersey City runoff, but he fails to mention that the last time Hoboken held a runoff election for Mayor in 2009 turnout actually increased from the initial election.”

DeFusco also accused Bhalla of vetoing the measure to increase his chances of re-election since “he has not demonstrated the ability to secure majority support or to work collaboratively with his fellow elected officials.”