Bayonne Board of Education Trustee and council-at-large candidate Jodi Casais is taking aim at a Suez Water mailer touting their partnership with the city: “[they] must think we are stupid.” 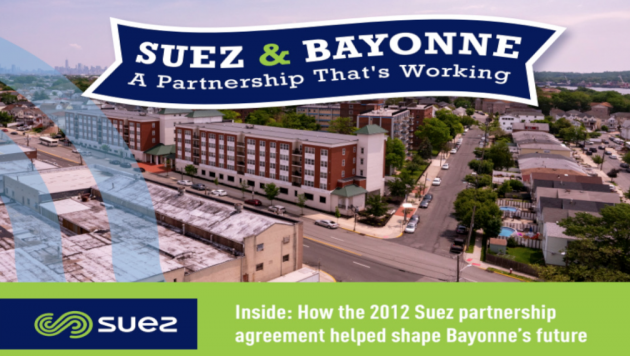 “Now we know why Mayor Davis says nothing regarding our high water bills and refuses to stand up for Bayonne residents against Suez. Once again, he has chosen to side with big business against Bayonne residents and our local small businesses,” Casais, who is running on Council President Sharon Ashe-Nadrowski’s ticket, said in a statement.

“Davis and Suez must think we are stupid. We are drowning in water bills and flooding has never been worse. The main water line that supplies Bayonne’s clean water is scheduled to fail in a couple of years. It literally leaks thousands of gallons of our drinking water into the Hackensack River each day.”

According to the mailer, where most of the information is featured on the new website mybayonnewater.com, the Peninsula City was facing a several annual budget crisis since 2000, the state Department of Environmental Protection blocked new construction, and 40 percent of Bayonne’s water was lost due to outdated infrastructure.

The deal with the city offered $150 million to fix the budget shortfall and an additional $157 million for water system improvements.

Per the agreement, Bayonne gave up its management of the local water-sewer utility, and turned it over to United Water and its private investment partner, KKR, for a 40-year period.

Additionally, KKR paid 90 percent of a $150 million investment to the city upfront ($135 million), with Suez covering the additional 10 percent, of $15 million.

Suez spokesman Chris Halleron said the mailer wasn’t supposed to be political, telling HCV that the mailer was sent to promote their new website “which provides greater transparency for city residents and businesses regarding the $300-plus million of water system investments being made by the company to improve their service.”

“These investments in Bayonne have been executed while keeping the utility’s rate increases below the national average. A decade of steady infrastructure upgrades, coupled with the latest in sensory technology (smart covers, acoustic line inspection, advanced metering) and computerized maintenance management system software, have allowed Bayonne to meet its ever-evolving water needs,” he added.

Expectedly, Casais was still not convinced that Suez has good intentions.

“Instead of spending thousands of dollars of our money on a political mailer in the middle of an election to help your boy Jimmy, how about you give the Bayonne ratepayer a break,” she asserted.

“Bayonne residents understand what is happening here. Suez is scared they will lose their puppet mayor, so they have decided to engage in an election instead of running a water company. Good luck. The people of Bayonne want change, and it is coming on May 10.”

She also claimed that the city adopted an ordinance to bond for the repair of the Hackensack water line over five years ago but remains stagnant, while they are also facing a $321 million dollar bill to fix its combined sewer overflows problem.

In response, Davis said he was “completely unaware” that the mailer was going out before it hit his mailbox and that he had not received financial support from Suez in the past, nor did he plan on accepting any in the future.

“The Suez contract was negotiated long before I took office and the simple fact is that canceling it now would cost the city over $300 million, which has been confirmed by multiple outside legal reviews and would be a total disaster for Bayonne taxpayers,” he replied in his own statement.

“If my opponent’s solution is to cancel the contract, that means she’s in favor of the biggest tax increase in Bayonne history, laying off municipal employees like police officers and firefighters and plunging our city into financial chaos.”

At the end of January before she was a declared council-at-large candidate, Casais spearheaded an effort asking the New Jersey Board of Utilities to probe the city’s water deal, though they have not publicly responded yet as of this writing.