The Board of Ward Commissioners had to reschedule this evenings meeting to discuss the new Jersey City maps due to capacity limit issues with Zoom. 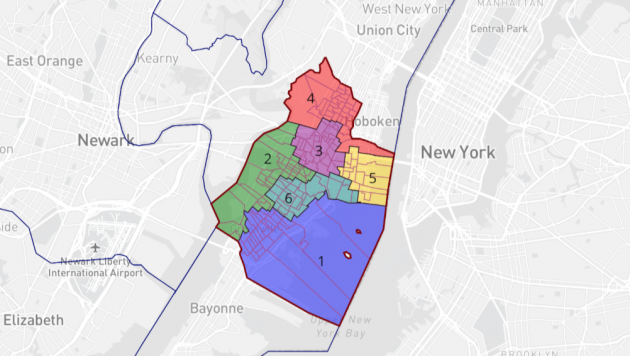 “Using the county zoom, the board was under the impression we’d have the capacity that the board of commissioners do, which is 1,000, and we didn’t realize until we were underway that it had a 100-person capacity,” Hudson County Board of Elections Clerk Michael Harper said over the phone after the meeting had ended.

“I’ve reached out to the New Jersey Attorney General’s Office asking for advice on how to get an extension. We obviously can’t meet our upcoming deadlines because of what happened tonight.”

The ward commissioners release their drafts of the six new Jersey City ward maps earlier this week, featuring big changes such as Society Hill and the Bayfront area moving to Ward B, as well as Liberty State Park and the Liberty Science Center/SciTech Scity heading to Ward A to ensure uniform population distribution in each ward, as HCV first reported.

The state required process, which occurs about every 10 years after each U.S. Census, asked the Board of Ward Commissioners to approve the new maps by Sunday and then submit them to the New Jersey Secretary of State’s Office by Friday, January 21st.

With the commissioners, who met at Hudson County Plaza, voting to reschedule the meeting for Thursday at 6:30 p.m. at City Hall, 280 Grove St., it would be impossible to still hit those deadlines.

Harper also said that  there are concerns about being able to effectively host a hybrid meeting at Jersey City council chambers, noting that the city council has not done so.

City Clerk Sean Gallagher (who is also the secretary of the ward commissioners) said it wasn’t a possibility at Wednesday’s council meeting, though Harper said “we’re checking our options to ensure maximum potential participation.”

Additionally, Harper pointed out that just like any other New Jersey governing body, they must provide 48 hours notice of any meeting in at least one newspaper, which could prove to be difficult over a holiday weekend.

For that reason, he stated he wouldn’t be surprised if the meeting was not held until the following week, floating the possibility of Tuesday, January 25th.

Hudson County Commissioner Bill O’Dea (D-2) was one of about 60 people who attended this evening’s proceedings in person and pushed for rescheduling when he difficulties with Zoom were brought to light.

“I’m glad they rescheduled it: the people have a right to be heard. Redistricting has a big impact on people’s lives and everyone deserves a fair, open chance to be heard. I think more changes were made than there needed to be in my district.”

Local activist Joel Brooks, who ran a competitive but unsuccessful bid for the Ward B council seat in November, also went over to 257 Cornelison Ave. this evening and expressed disappointment in the outcome.

“It was disappointing to see the redistricting commission was unprepared to host a successful hybrid meeting. There has been ample opportunity to figure out the logistics,” he said.

“If faith communities in synagogues, temples, churches and mosques can figure out hybrid meeting formats for large groups of people our government should be able to do the same.”