The Board of Ward Commissioners have proposed a new Jersey City map ahead of Saturday morning’s hybrid meeting at City Hall. 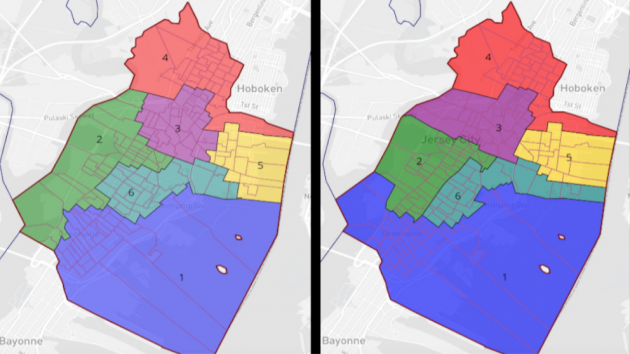 The new map, which began circulating late this morning, keeps a number of changes proposed in last week’s map such as Ward D picking up a sliver of Ward E north of the Holland Tunnel, along with Liberty State Park and SciTech Scity still pegged to move from Ward F to Ward A.

However, the latest redrawing also features the Marion Gardens moving from Ward B to Ward C, Ward F picking up an additional few blocks from Ward E north of the Jersey City Medical Center, among other boundary adjustments.

” … The board’s original map, I will say, was defendable: the demographics were good, the deviation was quite low,” Hudson County Board of Elections Clerk Michael Harper said on this afternoon’s episode of HCV Live and Uncut.

“But I think after the amount of people looking to have input on the process after seeing that map, the board saw it and sort of agreed ‘okay, maybe we went a little too afar.’ This map, if you look at it, it’s visually closer to the old map and sort of tries to keep everything a little closer to what people are used to.”

The latest drawings maintain those same averages, with the exception being Ward F becoming the least populous at 48,311. Additionally, in both instances, the deviation is about 1.8 percent.

“It’s all about numbers and demographics and trying to maintain. The law has said over and over that where possible – rewarding on every level: federal, state, and local – to make every attempt to maximize minority electoral possibilities, opportunities,” Harper also said on today’s program.

“And I’ve heard it said in regards to the last map it was sort of put out there like ‘oh it looks like the board’s trying to pack the Black vote into a ward or two’ … Another way to look at it, what is preferable: to have two wards with 50, 60 percent minority demographics or spread that over three wards and make them 15 to a quarter each?”

After Friday evening’s meeting didn’t come to fruition due to struggles with Zoom, residents can weigh in on the meeting Saturday morning at 9:30 a.m. at City Hall, with a virtual option available as well.

Anyone who wishes to speak must sign up here and further information can be found here.

In accordance with state law, the ward commissioners must meet within three months after the governor approves the U.S. Census results (municipal redistricting occurs once a decade).

Gov. Phil Murphy (D) approved the census results on September 16th and the Board of Ward Commissioners convened for the first time on December 15th, where they determined that the current city population distribution required the six ward boundaries to be redrawn.