Bayonne landmarks, including certain areas of their high school, appeared in three separate TV commercials paid for Trenton’s Bad Bet, a group that has been urging New Jersey voters to vote against bringing casino gaming to the northern part of the state. 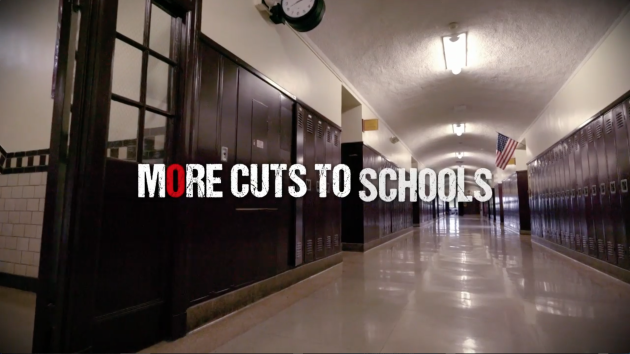 In a TV commercial titled “South Jersey,” uploaded to their YouTube page on October 3, near the end of the video, 25 seconds in, a man is seen standing on the sidewalk in front of Bayonne High School.

In a video called “30,000 Lost Jobs,” uploaded to their page on the same day, a scene in the hallway of Bayonne High School is briefly featured, as well as another shot that shows a man walking behind the local ice skating rink.

The third commercial, simply called “Einstein” and uploaded to YouTube on September 11, features a man dressed in an Albert Einstein costume claiming to be “no Einstein” saying that it’s obvious expanding casino gaming into North Jersey would only help special interest groups and Trenton politicians.

According to multiple sources, who spoke under the condition of anonymity since they were not authorized to speak on the matter, this commercial was filmed in the library of Bayonne High School.

One of these sources also revealed that FP1 Strategies LLC, one of Washington D.C.’s most prominent consulting firms, and the Bayonne BOE signed off on an agreement that would allow them to film inside the high school for one day, August 6, when no classes were in session.

FP1 Strategies LLC paid the Bayonne BOE $3,500 to use the school to film for one day and the agreement was signed by Superintendent of Schools Dr. Patricia McGeehan, Board Secretary Dr. Gary Maia and FP1 Strategies Production Partner Mark Walpole.

The copy of the agreement shown to Hudson County View was not dated.

According toÂ a report filed with the New Jersey Election Law Enforcement Commission (NJ ELEC) on October 11, FP1 Strategies LLC was paid $1,650,457.15 by Trentonâ€™s Bad Bet for consulting and advertising services between August 1 and October 7.

“We worked with a location scout that found the high school a suitable location for what we needed with the film shoot,” said Trenton’s Bad Bet Executive Director Bill Cortese.

Yesterday morning, Hudson County View sent an email to all eight trustees of the board inquiring about the matter and only three responded.

Bayonne BOE President Joe Broderick admitted that the board did not vote on the matter, but he believes that’s been standard procedure for years and also noted it’s always a positive when money can be brought into the district without being a detriment to the students.

â€œNo there was never a vote. Weâ€™re very rarely ever made aware of the school facilities being used for filming. Itâ€™s not uncommon for TV show, commercials and music videos to be filmed in Bayonne though,” Broderick said over the phone yesterday.

“As long as weâ€™re not disrupting the students and itâ€™s another way to make some income, we think itâ€™s terrific. To my knowledge, boards have never voted on this sort of thing.â€

However, his fellow trustees Mary Jane Desmond, who is running in the November 8 election for a three-year term on the board, and Christopher Munoz were much less enthusiastic about the development.

“Without a doubt Bayonneâ€™s beautiful, stately High School is an awesome backdrop for any video and has been used as such multiple times. And, I donâ€™t believe anyone would take issue with additional funds coming into the district,” began Desmond.

“However, I personally think it is inappropriate to use our facilities in a political ad â€“ unless it is done with the expressed approval of the trustees,” she added, further explaining that it was unclear if the central office was even aware of what the footage was going to be used for.

A former councilwoman who also serves on the now defunct Bayonne Local Redevelopment Agency, Desmond stated that the BOE probably needs a firmer policy about how public property is used in filming, though she is yet to be brought up to speed on what the complete current policy entails.

Munoz largely echoed what Desmond said, exclaiming that he was “extremely disappointed” the high school appeared in a political ad.

“As a trustee, I am extremely disappointed that our high school campus was used for a political ad. The Bayonne Board of Education is in the business of educating children, not furthering a political agenda,” he said, reiterating that the current policy needs to be further examined and such matters should come to a vote by the board in the future.

Munoz also agreed with both Broderick and Desmond in that he has no problem with media productions being utilized as an “alternative revenue stream” as long as it does not interfere with students.

Bayonne High School has undeniably been a popular filming location in the past, the site where Pearl Jam filmed their music video for their 1992 smash hit “Jeremy,” as well as the 2002 film “Swimfan.”

The former Military Ocean Terminal has also been a key filming location for major Hollywood productions, such as the hit HBO prison drama “Oz.”

Furthermore, Oceanport Mayor Jay Coffey, also corporation counsel for the City of Bayonne, endorsed Trenton’s Bad Bet on September 15, about five weeks after the footage for the commercials were filmed.

â€œOnce again, Trenton politicians have put special interests over people by pushing for casino expansion into North Jersey,â€ Coffey said at the time. â€œAs currently proposed, this expansion would only benefit a small group of well-connected, New York developers, instead of the citizens of New Jersey.

Speaking with Hudson County View, Coffey said he was unaware Bayonne was used as a filming location until after he made the endorsement and further explained why he believes the current ballot question should not pass.

“New Jersey has been slow to accept the fact that we donâ€™t have a monopoly anymore, the monopoly ended in 2006. Pennsylvania is no. 2 for casino gambling [in the country] now. This doesnâ€™t expand gambling: it just becomes a duopoly up here,” explained Coffey, also stating he is in favor of expanding gambling in the state under the right circumstances.

“It (a casino) can only go in two places in NJ, you arenâ€™t telling me where theyâ€™re going to go, theyâ€™re going to cost a billion dollars each and you need a casino license in the state of NJ … When you look at what theyâ€™re talking about here, it looks like thereâ€™s way more hands than there is pieces of the pie.”

Recent polls have indicated that New Jersey voters will overwhelmingly vote against bringing casinos to potential locations such as Jersey City and the Meadowlands when they hit the voter’s booth on November 8.

The three commercials in question that feature Bayonne landmarks can be seen below.

LETTER: Despite what HCDO chair says, Dems have ‘disgusting’ discourse in...

Murphy: Despite Jersey City’s plans, no soft openings in store for...