A Bayonne plumber has been sentenced to one year in prison for fraudulently obtaining $224,250 in grants from the U.S. Department of Housing and Urban Development, U.S. Attorney Paul Fishman announced.Â John Youngclaus, 44, was sentenced to one year in prison by Trenton U.S. District Judge Peter Sheridan, also ruling that he will have three years of supervised release once he gets out of jail, authorities said.

His maximum sentence could have been 10 years in prison.

As a part of his plea agreement, Youngclaus said he must pay back the $224,250 he was fraudulently awarded in HUD grants. He could still be fined up to $448,000, court documents show.

YoungclausÂ pleaded guilty on March 17 to colluding with other contractors to secure projects funded by federal grants, which were administered by the Bayonne Department of Community Development.

Under a federal program, grants provided up to $200,000 to low-income families to rehabilitate and repair their homes regarding conditions affecting health and safety, accessibility, energy efficiency or code compliance, officials said.

The CBDCD selected contractors for the HUD-funded rehabilitation grants through a competitive bidding process that required the submission of bids from competing contractors with estimated price quotes. The CBDCD selected the lowest bidder for particular applications, court documents show.

Between January 2012 and December 2012, Youngclaus solicited, received and submitted bids from competing contractors that were higher than the bids that Youngclaus submitted to the CBDCD on behalf of JRY, officials said.

On at least one occasion, Youngclaus received blank invoices from a competing contractor and Youngclaus wrote the job details and price quote on the blank invoice and submitted the fraudulent bid along with a lower bid from JRY to the CBDCD for a certain grant-funded job to obtain the grant project, authorities said.

Additionally, court documents describe at least two instances when Youngclaus submitted fraudulent bids from competing contractors for properties that he owned in Bayonne. 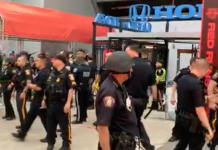