“She’s incredibly energetic, she’s very smart, a real problem solver, she’s been a real teammate of mine for the last eight years – who’s counting right?,” Cunningham said during brief remarks in front of a crowd of around 50 people at Moran’s Pub last night.

“The 6th Ward and the City of Hoboken has been very fortunate to have her as their advocate,” he added, before introducing Giattino to loud applause.

Cunningham has been largely out of the public eye since announcing he would not be seeking re-election about a week-and-a-half ago, but anyone that was expecting him to remain firmly on the sidelines between now and November looks like they’ll be disappointed.

Coming out the victor in two daunting contests in both 2011 and 2015, Giattino is hoping for the same result in November when she takes on Cristen Cricco-Powell, who is backed by Mayor Ravi Bhalla.

Once a close friend and ally of Bhalla, those days appear to be mostly over as he and the councilwoman were never able to mend fences in the aftermath of a brutal 2017 mayoral contest.

Despite those facts, Giattino kept her comments positive among friends, family and supporters ahead of what promises to be another barnburner in the 6th Ward.

“I am so thankful that my family knows how important the community is and how important building community is – and that I think speaks to this room. Just take a look around and what better community we have. We have people in here that I’ve known for decades,” she stated.

“People that I’ve known for less than a year. People that have lived here for decades, people that are new to Hoboken: all of you have such a wide range of issues and concerns and a lot of them don’t overlap at all. But, what we all share is that we all want to build a Hoboken that we can all be proud of to call home.” 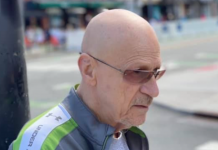