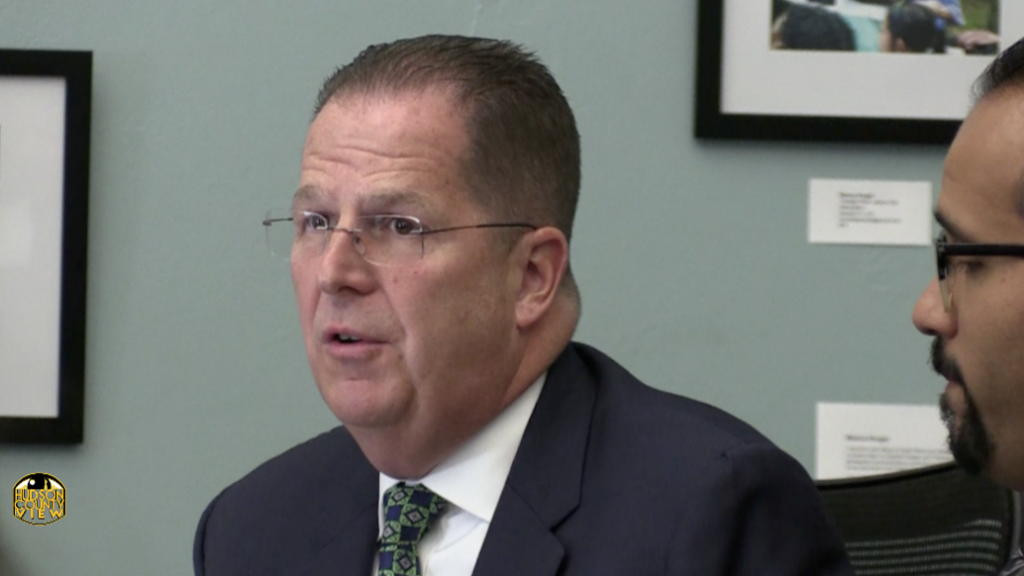 “Rent control impacts the most vulnerable in our community, and I think that if any community really needs rent control – especially with all of the development taking place — it’s Jersey City,” Stack said, adding that the number of evictions in this county are “in the neighborhood of about 18,000 a year.”

“Housing is not a luxury its a necessity, and I think that’s been lost. So what you’re doing here in Jersey City … is so important.”

Stack, along with other Hudson officials including Freeholder Joel Torres (D-4), testified as part of an ongoing schedule of Jersey City committee meetings to hear issues from stakeholders as the city works to put forth a comprehensive rent control policy.

The committee, chaired by Council members James Solomon and Joyce Watterman, was formed in May.

It heard from a number of tenants last month, who told stories of of landlords overcharging rent, ignoring state and city housing laws, and even using threats and intimidation against tenants who bring up issues with their units.

Additionally, the committee also heard from local landlords earlier this month, including a representative from Newport, as well as smaller landlords who own rent controlled and non-rent controlled apartments.

Those unintended consequences were echoed during testimony today from Vivian Brady-Philips, the executive director at the Jersey City Housing Authority, which oversees low-income housing complexes as well as the section 8 program.

Jersey City voucher holders, she said, are concentrated primarily in Wards A and F, but are increasingly becoming pushed out of more wealthier areas. Some 8,000 residents in Jersey City are currently on a waiting list for section 8 housing, she said.

“In theory, [section 8] participants are free to choose any rental housing that meets program requirements,” she said. “However, in reality, discrimination in limited housing stock exists in more affluent areas of this city – leading to residential segregation of voucher renters.”

She suggested Jersey City reestablish an exemption that was eliminated in the city’s rent control ordinance in 2017 for section 8 voucher recipients.

“It might be enough of an incentive for a landlord to offer housing to a voucher holder. That type of policy would help the low income residents of this city,” she said.

Furthermore, testimony from a number of officials during committee hearings stressed the need for bolstered regulation and oversight coupled with a new ordinance.

“The ordinance would be great, but you really need to have teeth in your rent control office [and] you need to have a mechanism for enforcement,” Stack said.

“Many times you’ll have rent control in buildings but you’ll have unscrupulous landlords… that will charge a tenant $300 or $400 more a month.”

“Each municipality really needs to step up to the plate and have their own legal service available … they can’t go to court with every tenant, but they can at least give advice before they go to court.”