A rally against U.S. Immigration and Customs Enforcement (ICE) was held outside the Hudson County Correctional Facility last night, calling for the release of detainees, as opposed to transferring them out of state. 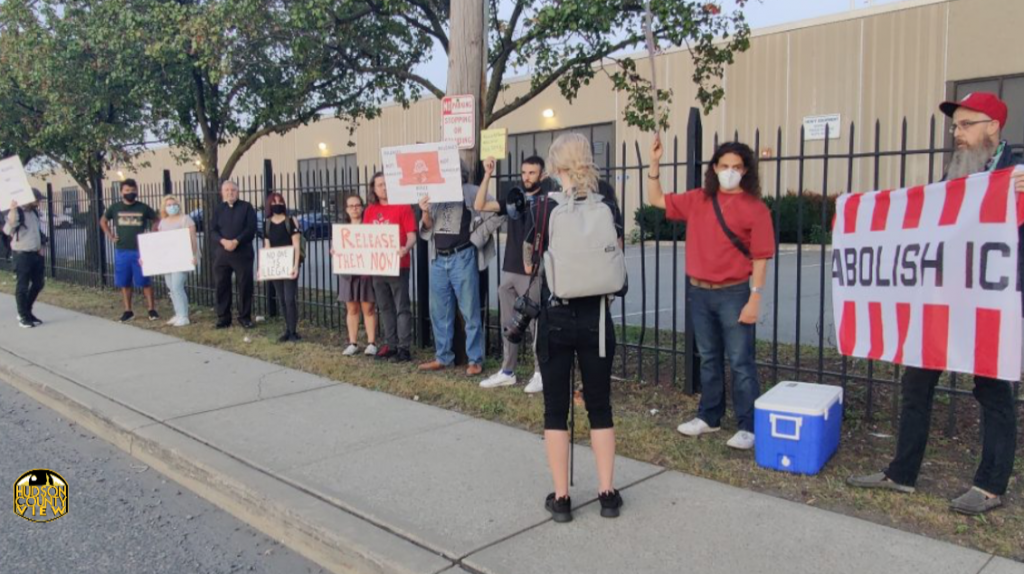 North Jersey Democratic Socialists of America (DSA) and other like-minded activists also asked the Hudson County Board of Commissioners support their demand that ICE release rather than transfer prisoners.

“When they renewed the contract … they insisted they were afraid of transfers and transfers began happening and they have literally done nothing,” said Whit Strub, an activist with North Jersey DSA.

He expressed particular disappointment in Commissioner Al Cifelli (D-9), who said he voted to renew the ICE contract in November to make sure detainees “didn’t have to walk alone,” referencing late Congressman John Lewis.

“Now that ICE has been lugging them over the bridge in chains, Cifelli is completely silent. It’s just shameful,” he said, also stating that he would’ve liked to see more vocal opposition from local leaders like Jersey City Mayor Steven Fulop, who he referred to as “a craven machine Democrat.”

Envision Freedom Fund Director of Advocacy and Policy Tania Matos said she has been in touch with folks inside for a year and a half.

“They say they want to do better but they’re not. As an immigrant advocate who’s been doing this work for years, over a decade, there’s not a lot of differences between Trump and Biden right now,” Matos said regarding federal policy.

She added that she wants to hold the Hudson County officials accountable for the COVID-19 deaths and infections that occurred in the jail she.

Matos continued that she thoroughly believes that the protests outside Hudson County Executive Tom DeGise’s home, which has spurned ongoing litigation, were warranted.

“If people inside can’t sleep … and are dying inside, why should they go to sleep at night like nothing is happening like they don’t have a hand in the death of people inside?,” Matos said.

Jake Ephros, also of the North Jersey DSA, called for the full closure of jails like the county facility in Kearny.

“ICE has been inhumane to each and everyone one of us here,” said an individual calling from the jail who had been there for 23 months.

He noted 10 people had already been transferred to an ICE facility in Orange County, New York.

Matos translated for Spanish-speaking prisoners who said they were unable to speak to their lawyers about their cases.

Many complained about being moved within the facility and being forced to carry their mattresses with them.

The telephones don’t work well, the bathrooms are broken, and meal times are arbitrary at the guards whims, several detainees claimed, along with not being able to speak to their lawyers upon request.

Another said he contracted gout, hypertension, and depression, none of which are being treated.

Editor’s note: Daniel Ulloa is the vice president of communications for the Latino Action Network, a group that has previously spoken out against ICE detention.