Anthony Vainieri was officially sworn in by North Bergen Mayor and State Senator (D-33) Nick Sacco as a Hudson County Freeholder representing the 8th District in a ceremony held shortly after midnight on New Year’s Eve. 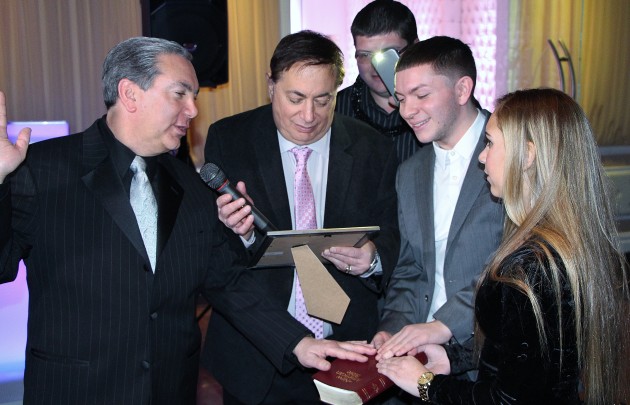 Vainieri, who soundly won the Democratic Primary election in June and then steamrolled the competition in November, will now officially represent North Bergen and parts of Jersey City and Secaucus at the county level.

He was joined at the ceremony by his children Anthony and Antonia, as well as hundreds of friends and supporters who packed North Bergen’s Waterside Restaurant for a unique swearing-in ceremony/New Year’s Eve party.

“I take an enormous amount of pride in being sworn-in as a Freeholder representing my home town and all the many friends, family and supporters I will now have theÂ privilegeÂ to serve,” Vainieri said Â in a statement.

“I would like to thank my family and friends for their amazing support, and I am especially grateful to Mayor Nick Sacco for not only conducting the ceremony, but for his incredible support and mentorship over the years. I will work tirelessly as a Freeholder to justify the faith and trust that has been placed in me and I will not let the residents of North Bergen, Jersey City and Secaucus down.”

He is also the co-owner and manager of the Vainieri Funeral Home in North Bergen and comes from a family with deep roots in public service.

Anthony’s father, Anthony Vainieri Sr., served as a State Assemblyman and member of the North Bergen Board of Commissioners, while his sister Valerie Vainieri-Huttle is a current member of the Assembly representing District 37.

Bayonne man assaults, spits on Hoboken cops after being charged for...