Partnership for Jersey City, an anonymous group advocating for small businesses, has come out against the city’s potential one percent payroll tax that is awaiting a vote from the state legislature.Â 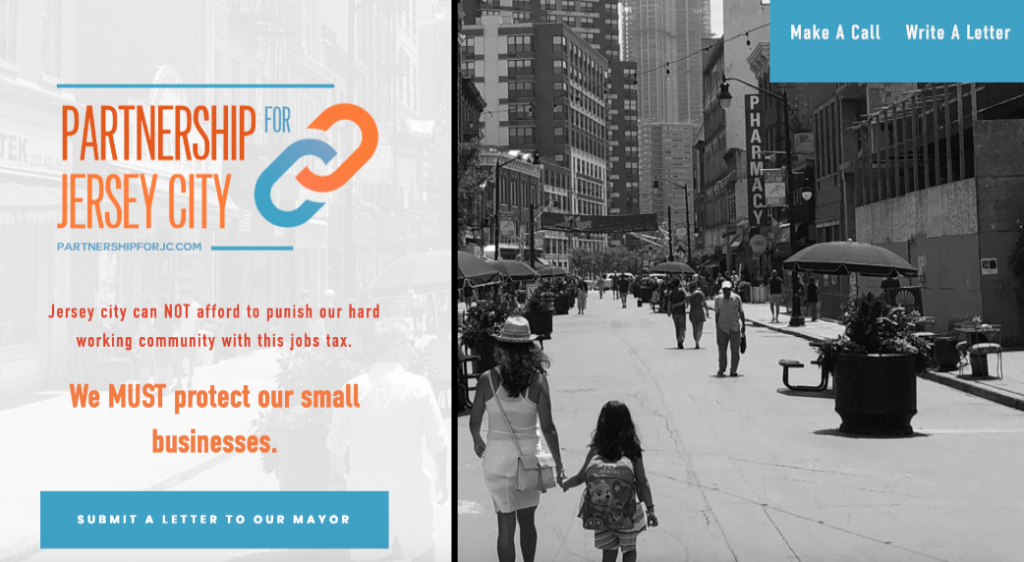 Sending out mailers that promote a new website, partnershipforjc.com, this week, the group claims that “Jersey city [sic] can NOT afford to punish our hard working community with this jobs tax.”

The basic website directs those who oppose the bill to call anyone on the Jersey City council, as well as Mayor Steven Fulop, at their offices and also has a pre-written e-letter that can be submitted to the mayor.

“Over the last decade, businesses large and small have gone to considerable lengths to provide jobs and services to our community. Because of their hard work and dedication to Jersey City, our local economy has grown, our neighborhoods have improved, and our community has flourished,” the message says.

“The implementation of a 1% payroll tax would be a tax on our jobs, jeopardizing our ability to be paid good salaries and severely limiting the amount of our future employment opportunities. It is important that we as a community move forward, not back.”

The HCCC and NJBIA had previously expressed public opposition to the legislation.

Aside from Partnership for Jersey City, no individual(s) or entities have taken ownership for the website or the mailers.

A general email provided on their website did not return an inquiry seeking comment on who was spearheading the campaign.

The bill was introduced to combat the new school funding formula that is expected to cost the Jersey City Public Schools $150 million over the next seven years.

The tax, which is not allowed to exceed one percent according to the current version of the bill, is estimated to bring in $70 million in annual revenue, according to state Senate President Steve Sweeney’s (D-3) office.

The legislation moved through the senate budget committee by a vote of 8-5 last month, with each Republican lawmaker voting no. The full state senate and assembly have not voted on the measure yet.

Ward D Councilman Michael Yun said in a statement that he agrees measures need to be taken to make up for the city’s school funding deficit, but at the moment is not ready to come out against the payroll tax.

“Without casting aspersions about the group’s motives, the most important take-away from their campaign hasn’t been addressed by the group or by those they’ve inspired to call and/or email my offices: Jersey City Public Schools, in the aftermath of cuts to state funding totaling hundreds of millions of dollars, are in a state of emergency,” he said.

“Our children’s futures are being held hostage and need local leadership that is willing to address this emergency. Somehow we must make up these funds, and that’s just to get to our previous state of underfunding our schools through fiscal neglect. That’s why I began meeting with stakeholders weeks ago.”

Yun added that his current goal is not to eliminate the payroll tax, but to “solve the problems facing our children.”

Fulop, his office and several other members of the Jersey City council did not return inquiries seeking comment.