The Jersey City Council heard complaints about steep rental increases and unexpectedly approved the the 6th Street Embankment Redevelopment Plan after it wasn’t initially on the agenda. 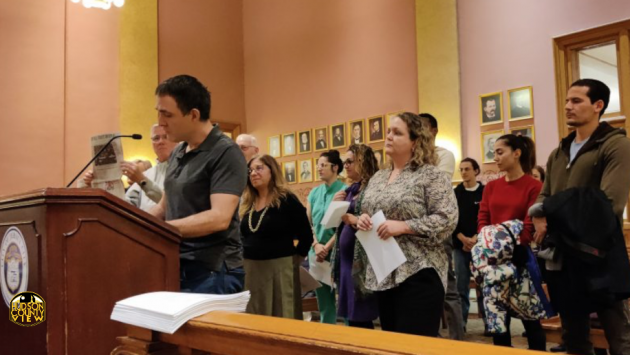 “Can we be provided with a list of where tenant protections are enforced? There was no filing for my building ever,” he exclaimed.

“What have you done … and what you do going forward to address rent control?”, Weller asked.

He also noted Equity Residential (Zell’s company) was named in a national class action lawsuit stemming from abuses due to the Real Page Software that the U.S. Department of Justice is spearheading.

“My building should be subject to rent control. Advocate for your citizenry … and help enforce the law,” Jessica Brann, of Portside Towers – one of six properties in the city manages by Equity – said.

She noted that they imposed a 34.5 percent rent increase last year, which she called “absurd.”

She continued that an investigation organized by tenants and community members revealed that neither tower was eligible for a rent control exemption, as well as that the city erred.

“The landlord-tenant office in Jersey City has failed to administer and enforce the ordinance,” Brann argued.

Jessica Rasulo, who lives at 100 Warren St., elaborated on how there was no filing of a rent control exemption.

“No filing, no exemption … the landlord-tenant office has allowed an exemption for rent control for 30 years because they allowed a filing that was … two years too late,” she stated, noting the city determined the 30-year exemption expired on August 25th.

“One day before this exemption ends, it is enforced to the benefit of the landlord … The courts have already ruled on this … Jersey City is well aware of these cases and attempting to ignore the law and the courts,” Rasulo added, claiming this showed support for large corporations and not constituents.

Alissa Lads, another Portside Towers resident, asked why local landlord were “given uncheck power to cause harm?”

She also said that rent control should ensure she doesn’t have to pay more than a four percent increase, yet she still recently faced a 20 percent hike.

“We decided to sign under protest. We didn’t have the bandwidth to fight this increase. There are laws in place to prevent this increase. I still have no relief,” Ladas stated, continuing that the building management is now demanding a 10 percent increase.

“Working with the city is not how one operates within the law. There is no documentation of a timely filing for rent control exemption,” she said.

When asked if he knew anything about the situation by Council President Joyce Watterman, Ward E Councilman James Solomon said a number of tenants filed an illegal rent control application in the spring.

He also said that Division of Housing Preservation Director Dinah Hendon determined it did fall under the city’s rent control ordinance, however, she exempted them for 30 years.

“That paperwork was not properly filed. They disagree with Director Hendon’s ruling,” Solomon explained.

“I would like to have a meeting on the record with Director Hendon and the rent leveling board,” added Councilman-at-Large Daniel Rivera said.

“They probably live in the most abysmal elevator buildings in this city,” he said to applause. “We have to make sure this gets fixed. We have issues here. We have safety issues. I went to this building twice. There were tenants who could not come down. I wish this to be rectified as soon as possible.”

Watterman also called for the city to hold themselves accountable for failures, calling a 34 percent rent increase “ridiculous.”

“We get numerous calls that rent is being raised across this city. We have to do something different,” adding that Hendon’s department is likely overworked and understaffed.

“The city is growing faster than we can handle, so we need to rethink how we are going to help. Councilman Rivera and Councilman Gilmore are definitely going to meet.”

Business Administrator John Metro added that Hendon could be invited to the next council meeting to provide clarity on this matter.

Also, at the Council meeting, the 6th Street Embankment Redevelopment Plan was approved unanimously, despite initially being listed on the agenda as tabled. The first reading of the measure was approved on October 26th.

City Clerk Sean Gallagher explained that the plan would not take effect until the city possesses the necessary blocks and the lawsuit settlement occurs.

“Is this a substantial change?” he asked.

“It merely clarifies conditions. No, the change suggested is not substantial,” Corporation Counsel Peter Baker replied.

“This has cost over 14 million in lawsuits. This has to end soon,” Ward C Councilman Rich Boggiano said, a point he has made several times in recent weeks.

Solomon, who oversees the ward where the embankment is, said that there is a lot of work to go before it becomes open green space.

He noted the Marin Boulevard redevelopment plan has to be amended and the aforementioned lawsuit still needs to be settled.

After the item was formally added back to the agenda, a fairly atypical move, it was approved unanimously (9-0).