The 26th annual North Bergen Winterfest drew a huge crowd last night, a few thousand strong, who braved the cold to take part in a large lineup of games and activities. 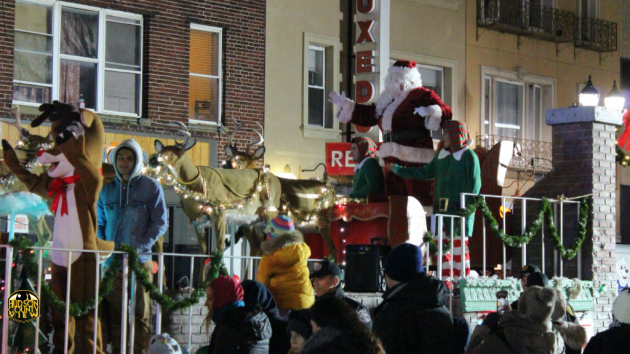 The celebration kicked off with a photo op at the library before local officials, public employees, and a cast of superheroes, Star Wars Jedis, holiday movie characters, children of all ages, and of course Santa Claus boarded a fleet of festive parade boats and rode down Bergenline Avenue to spread holiday cheer to crowds of spectators.

With scores of public safety and other town workers lending their volunteer efforts, Winterfest has grown in size each year since it started with humble roots 26 years ago, state Senator (D-32)/Mayor Nick Sacco said.

“Winterfest started out as a little block party on Broadway, and turned into a massive one that stretches from 85th Street down to 75th Street, into the park, and into the surrounding areas,” he explained.

“We have a great party tonight, and I’m looking forward to seeing everyone enjoy themselves.”

Organizers and volunteers behind Winterfest, the township’s largest annual event, say that they hope to bolster both turnouts and the lineup of attractions with each new holiday season.

All the usual fixings were in store, including family photos with Saint Nick and renditions of Christmas carols and holiday songs by the student choruses of North Bergen’s elementary schools.

Additionally, a mini ice rink with a supply of skates was set up at the corner of Broadway and 79th Street. Braddock Park hosted both pony rides and a horse-drawn carriage. Roadside vendor stations were brimming with food and drink.

Brightly-lit, trackless trains coursed countless loops while hauling plenty of passengers amid a small village of bounce houses, a rock climbing wall, and other rides were also available.

Those who missed out on North Bergen’s kickoff holiday event still have abundance of opportunities to celebrate. There is a near-daily lineup of events scheduled in the calendar section of the municipal website.

Next on the roster is North Hudson Regional Fire and Rescue’s Santa Parade, now at its 20th anniversary.

There will be high school and ROTC marching bands, motorcycle units, fire officials, floats, and much more.

Mike Montemarano can be reached at MonteHCV@gmail.com.

WNYPD’s Narcotics Unit to receive award from state for 2014 drug...