While Mayor Dawn Zimmer vs. 3rd Ward Councilman Michael Russo was the main event in Hoboken on November 3, politicos across the state eagerly anticipated the co-headlining bout of the evening that pitted outgoing Assemblyman Carmelo Garcia (D-33) against 6th Ward Councilwoman Jen Giattino. Garcia, the antithesis of Zimmer’s existence, has gone head-to-head with the mayor and Hoboken Housing Authority Chairwoman Dana Wefer on countless issues, prompting them to top this list last year.

The former executive director of the HHA, Garcia knew 2015 could easily be do or die for his political career, so he had no mercy when stepping up to the plate against his affable opponent, Giattino.

Giattino arguably got the ball rolling in this one, as a friend and political supporter teed off on Garcia, calling him a “dope” andÂ  a “cheat” at her September campaign kickoff.

At the October 1 council debate hosted by the Hoboken Quality of Life Coalition, Garcia and Giattino traded some haymakers over who was a no show in the 6th Ward outside of election season.

Unfortunately this was just a sneak preview of the bad blood boiling over between the two Hobokenites, as Garcia had to leave early for a previously scheduled fundraiser.

While this was fairly typical Hudson County election fodder, things began to get ugly when the “Real Democrats for Hoboken” group began paying for a relentless mailer campaign that attacked Giattino for a multitude of issues including opposing a 25 percent tax cut years ago. Garcia denied having any involvement with the dirty operation, which included an anonymous mailer that called Giattino “a fraud” who “violated law” for moving out of the ward for 15 months after Hurricane Sandy damaged her home.

However, Zimmer supporters aren’t buying that one, especially since outgoing 2nd Ward Councilwoman Beth Mason – a longstanding opponent of the mayor – and her husband donated $5,600 a piece to the political action committee.

Whatever the case may (or may not) be, Giattino wasn’t shy about returning fire, sending a letter to Assembly Speaker Vincent Prieto (D-32) accusing Garcia of electioneering for sending council mailers from his Assembly office. Hudson County View had the opportunity to ask Prieto about the situation, responding that “I don’t get involved in local races,” adding that he forwarded the letter to counsel at the state and it was up to them to decide if any further action needs to be undertaken.

As the bloody war of attrition came to a close, Giattino ended up besting Garcia by 208 votes.

Some say that Garcia’s time as a public servant (at least in the Mile Square City) is over, while others claim he is already gearing up for a council-at-large run in 2017. One thing that is for certain is that his ongoing battle with Zimmer and her administration is far from over, as the mayor, her husband and the HHA are still embroiled in a wrongful termination lawsuit.

Earlier this month, only Hudson County View reported that a Hudson County Superior Court judge ruled against releasing 1,000’s of emails between Garcia and his attorney Louis Zayas. 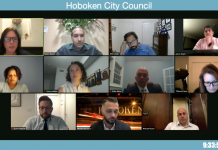 With 61 COVID-19 cases in Hoboken, possibility that portions of waterfront...