A West New York resident called on his elected officials to take a firm stance on the county’s controversial 287g agreement with U.S. Immigration and Customs Enforcement (ICE), asking for local police not to get involved with any deportation proceedings.

“This is truly just a question for information than anything else: wanted to know what this commission and the mayor has any stance or position taken at this time regarding the 287g agreement that Hudson County presently has with regarding the deputization of correction officers in the Hudson County holdings,” said resident Troy Mack.

“Myself, my family and others really appreciate what the West New York Board of Education has done in the past regarding welcoming communities here in West New York and I wanted to know if this mayor and this commission of ours will be joining other municipalities here in Hudson County in taking a strong stance [in this matter].”

During his annual State of the County address, Hudson County Executive Tom DeGise acknowledged that the county would continue their agreement with ICE, despite inevitable continued criticism from activists.

He argued that a 15-month study concluded on June 29, 2016 found that 599 foreign born inmates were held at the jail and less than two percent were flagged – and that those flagged were typically felons charged with murder, human trafficking and other serious offenses.

One week, later DeGise told Hudson County View that he plans on continuing the program unless the President Donald Trump administration, who has put a heavy focus on deporting illegal immigrants, pushes for the agreement to have more drastic provisions.

Then, about two weeks after that, the West New York BOE passed unanimously approved a measure declaring the school district a â€œsafe zoneâ€ for students regardless of their immigration status.

The resolution was largely symbolic since public schools are regarded as â€œsafe placesâ€ by ICE, but still received a mostly positive response from observers.

Mack argued that the agreement is “fundamentally in denial of due process” since someone accused of a crime in Hudson County could face deportation if they encounter a deputized corrections officer at the jail, which he feels is a violation of basic rights and due process.

He also alluded to the fact that Jersey City and Union City have already declared themselves sanctuary cities and requested that officials make a commitment that West New York police will not aid in deportation proceedings.

As only Hudson County View reported, State Senator (D-33) and Union City Mayor has already vowed that city police will not participate in any ICE raids.

The West New York Board of Commissioners did not respond publicly to Mack’s remarks and are still yet to take any formal action regarding sanctuary cities or deportation.

Last month, a spokesman for ICE confirmed that federal agents had performed, “targeted enforcement actions” in West New York, though were adamant “no raids” had taken place. 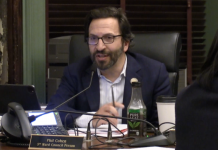