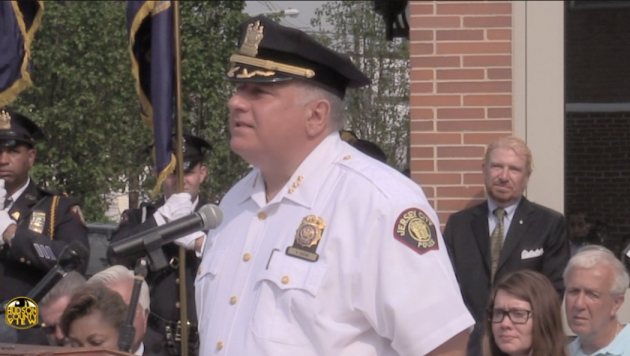 Zacche, 61, of Manalapan, pleaded guilty before U.S. District Judge Freda L. Wolfson in Trenton federal court to one count of embezzling, stealing, obtaining by fraud, misapplying, and without authority knowingly converting money belonging to the JCHA.

Between 2010 and 2014, the JCHA hired and paid Jersey City police officers to provide security at some of their housing sites.

In the plea agreement, dated August 17, 2017, Zacche admitted defrauding the JCHA by filling out and submitting time sheets representing that he completed certain security shifts even though he was not present at the JCHA site.

As such, Zacche was paid a total of $31,713 for work that he did not perform back whe he was a deputy chief, according to court documents.

Zacche faces a maximum potential penalty of 10 years in prison and a $250,000 fine, or twice the gross gain or loss from the offense.

Pursuant to the plea agreement, Zacche is required to forfeit $24,700. His sentencing is scheduled for April 9.

The Jersey City Police Department is cooperating with the investigation.

In a statement, Mayor Steven Fulop said his administration continues to do everything in their power “to root out corruption.”

“We have been aware of this for quite some time, and we were the ones that provided the allegations to the prosecutorâ€™s office in the first place when this was brought to our attention in 2015,” he said.

“We have zero tolerance for corruption or misconduct and todayâ€™s actions speak to this. We will continue to work with the federal authorities to root out corruption.”

Hudson County prosecutor’s office spokesman Ray Worrall said that his office never cleared Zacche of any wrongdoing even though he was not indicted locally.

“Former Jersey City Police Chief Philip Zacche was not cleared of any wrongdoing. We investigated this matter as an independent agency because the allegations involved the chief of the department,” Worrall began.

“Based upon the information provided at that time, the facts and allegations were thoroughly investigated including a review of documents that were provided by Jersey City and several witness interviews. The investigation did not disclose sufficient evidence to clearly prove or disprove the allegations. Itâ€™s clear the federal authorities had more resources and more information than we were ever provided.”

Zacche retired with a bit of controversy on June 1 of last year, given that he had accumulated over $513,000 in unused sick and vacation time.

With his guilty plea, Zacche is the 10th Jersey City cop to admit getting paid for a no-show job, though he is the first to admit accept corrupt payments from a public entity instead of a private contractor.

Late last year, Fulop said that he “would not be surprised if the [JCPD] off-duty jobs go away entirely in 2018” as a result of the ongoing probe by the FBI and U.S. attorney’s office.

On Wednesday, the city named 30-year department veteran Michael Kelly as Zacche’s replacement after going the second half of 2017 without a police chief.

Editor’s Note: This story has been updated with a comment from the Hudson County prosecutor’s office.Â

Prosecutor: Man charged with sexually assaulting a woman during 2007 North...