The woman that was rescued from the Hudson River by Hoboken police yesterday afternoon has been reunited with her family, authorities said.

At 4:01 p.m., Hoboken Police Officer Tyler Soto, of the department’s Waterfront and Parks Unit, was flagged down in the area of Sinatra Park, along the waterfront and was told a woman was in the water, according to Police Det. Lt. Edgardo Cruz.

Soto located the woman in the water a short distance off of the rocks at about 6th Street and Sinatra Drive. He immediately radioed in for assistance, police said.

Sgt. Keith Rotondi and Officer Libon Schelmety quickly got a water bag and rope to Soto, who went into the water and pulled the woman back to shore, officials said.

Authorities added that those officers, with the assistance of Officer Joe Lucignano and Stevens Police Officer Enrico Gnassi, began life saving measures before the woman was transported to CarePoint Hoboken University Hospital.

“This was a tremendous life save by Officer Tyler Soto who was on patrol along the Waterfront and acted quickly and proficiently and put his own life at risk,” said Hoboken Police Chief Ken Ferrante.

Police declined to release the women’s name, but said the 34-year-old Parsippany resident was reunited with her family earlier today. 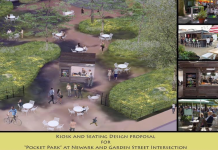