A West New York woman was fired from her job after a video she posted on social media of her ranting that she “hated black people” went viral on social media. 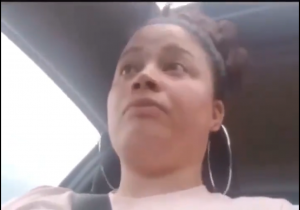 The woman, Jacqueline Michele DeLuca, posted a roughly minute-long rant on social media while driving where she said another driver ran a stop light and “looked at me like it was my… fault,” using the N-word multiple times.

DeLuca had been working at the Party City in North Bergen.

Party City issued a statement Thursday night addressing the “disturbing video post,” saying the company had “notified the appropriate authorities due to the threatening and disgusting nature of the content.”

“Party City stands in solidarity with our Black colleagues, customers and communities, and we condemn acts of racism, bigotry and hate. Disregard for basic human rights of any kind has no place in our communities or country, and certainly not at Party City.â€

NJ Advance Media first reported on the video and the woman’s firing.

DeLuca later posted an apology on her Facebook page, saying that regretted “using such words against a race I know everyone is behind for and I never meant to hurt anyone in anyway.”

“I let anger get the best of me at the moment and I ask as a human to please forgive what Iâ€™m trying to get across….” she said.

“… This is not someone I wished ppl to know me by but someone who is about change and equality and with everything going on, I was sucked in to the evil and confusion and with all that being said I wish to everyone around the world, I hope what life has become doesn’t affect you the way it has affected me.”

Menendez: ‘Senate Democrats delivered on our promise to act boldly &...

NBPD ‘is united with our community’ ahead of George Floyd protest,...