Jersey City’s new public bus service, Via, saw its “fast growing launch … in the U.S.” after two weeks of operations, the company’s CEO said today at a press conference. 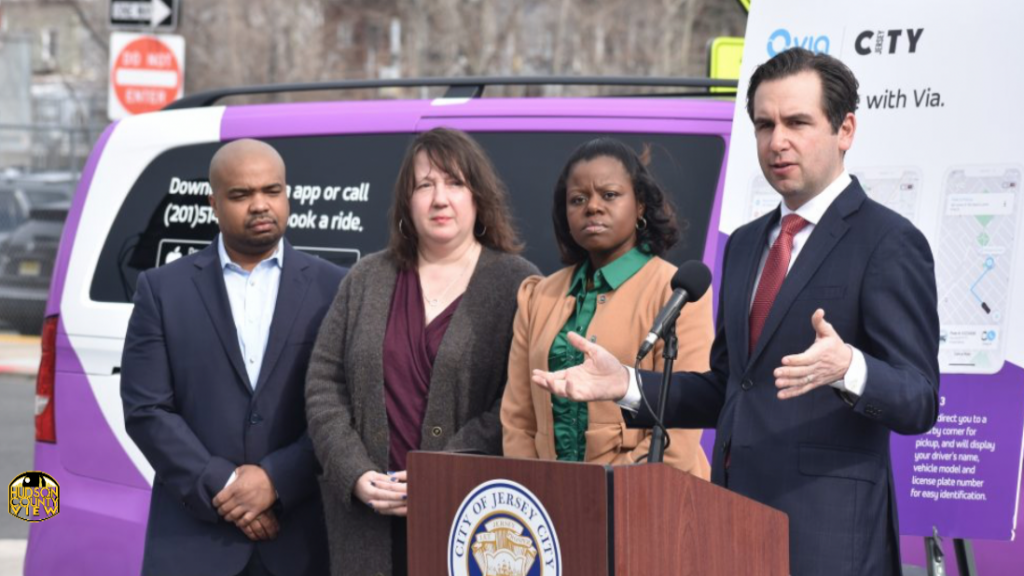 Two weeks after the programs launch, officials with the city and Via – think Uber or Lyft as an on-demand bus service – gathered outside the City Hall Annex to tout the “unquestionable success” of the launch, Mayor Steven Fulop said at the presser.

“This was the best Via launch in the entire country … [and] it really speaks to the need for more vehicles,” he said. “We’ll be working with them over the next weeks and months in order to fine tune the system to better service more Jersey City residents.”

Since its launch on Feb. 25, Via has logged over 700 rides per day, and has had nearly 1,000 passengers using the service per day, according to the company’s founder and CEO Daniel Ramot. The company only has 15 vehicles in service currently.

“We’ve seen incredible demand,” Ramot said. “There’s been so much demand we’ll probably need to add more vehicles,” he said, later noting that this was the company’s “fastest growing launch” in the country.

The city first announced the partnership with Via in September to “complement and extend Jersey City’s existing public transit infrastructure,” which has been plagued with delays and inconsistent fares.

The vendor partnership was the first of its kind in New Jersey.

The service was also adopted to address under-served areas of the city – specifically the northern and southernmost parts of the city – which have historically experienced a lack of transportation options.

Fulop today said that the city has “struggled with NJ Transit services… and it has put many residents in a position that impairs their ability to travel to and from work … limits their time with their friends and family, so it has a significant impact on quality of life.”

Ward F’s West Side Avenue Light Rail has been out of service for several months and will “still be down for a couple more months,” Ward F Councilman Jermaine Robinson said, cutting much of the city off from a vital transit option.

“The number one call I get from residents is saying, basically, we don’t have a way to get around,” he said. “So this has been a godsend to the community.”

City Hall officials today said that, based on data and rider feedback, residents and visitors are using the service “to fill the gaps in the existing public transit infrastructure for both commuting and leisure purposes,” city spokeswoman Kimberly Wallace-Scalcione said in a statement.

“The point is to help people who are far from transit to get easy access to those areas,” added city Business Administrator Brian Platt said. “We’re seeing already that a lot of the trips are into and out of Downtown, or out of Journal Square.”

Approximately 26 percent of the rides have been to transit hubs in Journal Square, Exchange Place and Grove Street, Fulop said.

“The results show that this is a more affordable option and often provides residents with more direct routes and closer drop-off points compared to the less reliable NJ Transit bus system,” Fulop said.

While Via operates in cityâ€™s across the country, they are best known for starting a similar networks using vans to shuttle commuters between uptown and downtown Manhattan.

Commuters can book a shared ride by using the Via mobile app, or by calling a dedicated phone line for riders without access to a smartphone.

Via matches multiple passengers headed in the same direction into one of 15 vehicles, and directs passengers to a nearby corner, or â€œvirtual bus stopâ€ for pickup.

Rides to or from Downtown cost $2 and rides within the outer service zone start at $2, plus $0.50 per mile. The service operates Monday through Friday from 6 a.m. to 10 p.m.

Meanwhile, there are currently two electric vehicles within the fleet; Platt said the city is “aiming to go fully electric with the entire fleet” as the partnership continues.