North Bergen Freeholder Anthony Vainieri (D-8) called Gov. Chris Christie (R) “a fat bully in a school yard” for shutting down a scheduled improvement project at James J. Braddock Park, one of hundreds of road projects paid for via the Transportation Trust Fund. 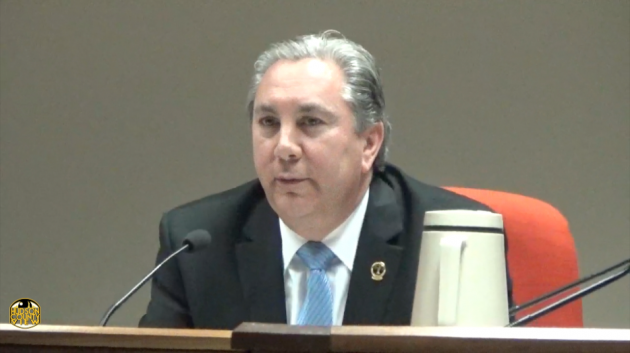 â€œHeâ€™s a fat bully in a school yard. When a little kid doesnâ€™t get his way, he stamps his feet,” Vainieri told Hudson County View over the phone on Saturday.

The conversation began after Vainieri wrote a Facebook post on Friday afternoon slamming Christie’s handling of the projects.

“As always, when our Governor can’t get his way in Trenton, he holds us all hostages, unless your name is Trump. Due to his order of all road repairs be stopped immediately, until he gets his way, the paving in Braddock Park is on hold. So our roads will remain in disrepair until he gets his way,” Vainieri wrote.

“This also affects the entire stretch of Park Ave in North Bergen. Call the Governor and demand we fix our roads! You can call him at the Trump campaign, cause he’s never in New Jersey.”

During the phone interview, Vainieri also said he had planned on touching up the park with paving that would improve the drainage grates, cement curbing, milling and stripping.

The work along the John F. Kennedy Boulevard East tennis courts portion of the 167-acre park, which stretches towards the border of North Bergen and Fairview near Bergenline Avenue, was set to begin today and was pegged to last four weeks, he further stated.

“There’s no school in session, people are away on vacation, there’s not too much traffic. Now, itâ€™s probably going to be done after school starts,” Vainieri explained.

“[Assembly Speaker Vincent] Prieto (D-32) has been saying for years the gas tax needs to be raised, now it finally gets through, and now all of a sudden Christie wants to roll back the sales tax leaving the next Democratic governor in a hole. Heâ€™s doing this on purpose for when he goes to [campaign in] Washington.”

Vainieri stopped short of stating who he will be supporting in the 2017 governor’s race, but it seems to be a safe bet that he will be supporting Jersey City Mayor Steven Fulop in the endeavor, given that he has the full support of Prieto and North Bergen Mayor/state Senator Nick Sacco (D-32).

Last month, the state Assembly passed a TTF bill, that also received the support of Christie, which would raise the gas tax by 23 cents per gallon.

Prieto defended the legislation by stating that by also dropping the current state sales tax by one percent, an average driver would see net savings of $335 a year.

After the state Senate could not come to terms on a TTF bill during their last session, Christie decided to halt all TFF-funded projects, effective as of Friday, July 8.

Vainieri didn’t stop there, also going after the Republican governor’s track record as a whole.

“What did he do? Walk around with a windbreaker during Hurricane Sandy? My grandmother couldâ€™ve done that. Heâ€™s done nothing but terrorize us in the county and in North Bergen. Itâ€™s not fair for the kids, itâ€™s not fair for taxpayers. Iâ€™m going to put up a big sign that says ‘Thank Gov. Christie,'” he exclaimed.

“There was no reason to stop all the projects, this is going to impact 2,000 workers.”

Brian Murray, a spokesman for Christie’s office, referring to Vainieri’s remarks as “gutter partisanship,” said the governor did what was best for the residents of New Jersey and that the shutdown was temporary.

“With the New Jersey Senate obstructing the bipartisan Transportation Trust Fund solution passed by the state Assembly, the Governor is obligated to protect the citizens of this State, so it is absolutely necessary that the remaining TTF funds be used solely for essential projects,” Murray said in an email.

“The Governorâ€™s shutdown order is for at least a seven-day period so NJDOT and NJ Transit can assess and prioritize the list of projects with the remaining TTF funds.”

Police: Hoboken Good Samaritan tried to save man who died after...