Jose Francisco-Garcia, 26, of West New York, was charged with vehicular homicide, driving while intoxicated, and failure to maintain a traffic lane, The Daily Voice first reported.

At approximately 1:29 a.m. this morning, the Fairview Police Department responded to a report of a motor vehicle crash in front of One Broad Avenue.

At the scene, officers observed a 2017 Honda Civic with severe damage resulting from impact with a utility pole. The driver, Francisco-Garcia, was outside of the vehicle and had suffered minor injuries.

Citing an anonymous eyewitness, The Daily Voice reported that Santos was killed instantly when his car hit the utility pole head on.

Francisco-Garcia is scheduled for his first appearance in Central Judicial Processing Court in Hackensack, on Monday, March 30th, officials said. 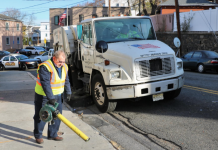