In light of Myrli Sanchez, a former opponent of West New York Mayor Felix Roque, being named to the North Hudson Sewerage Authority earlier this week, do you consider a spot on the board a major appointment? â€œMy fellow Commissioners and I are pleased to welcome Myrli as a representative of West New York at the North Hudson Sewerage Authority. Myrliâ€™s professional background will be an asset to the organization,â€ Roque said in a statement released last night.

While the agency, which serves Union City, West New York, Weehawken and Hoboken, is often overlooked by the average resident, they have a $51 million budget that impacts not only water rate bills, but also capital improvements and are currently ironing out a new affordability program for low-income families.

The NHSA was a hot topic in the Mile Square City back in January, when the Hoboken City Council surprisingly approved ex-Freeholder candidate Kurt Gardiner to usurp Frank Raia, a longtime chairman and 27-year-incumbant, on the board.

NHSA commissioners receive an annual stipend of approximately $4,800, the only board in Hudson County with any sort of monetary compensation for its members. 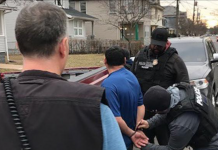