A Jersey City teen was arrested for two gunpoint robberies in Bayonne earlier this week, being hit with a slew of charges including kidnapping and armed burglary, police said.

On Saturday, August 6, around 2:58 a.m., a victim accepted a ride from Monroe, whom he only knew by his street name, to a party in Jersey City, officials said.

While driving in Jersey City, Monroe pulled a gun on the victim, pistol whipped him and took an undisclosed amount of money he just withdrew from the bank. He then demanded the victim withdraw another $1,000, authorities said.

The attacker then drove the victim back to his home in Bayonne and forced his way into the residence, but he fled the scene when a family member woke up and confronted him, police said.

The next day, Sunday, August 7 around 4:47 a.m., the actor approached a Bayonne man on his porch and pulled a gun on him after engaging in a conversation with him, officials said.

According to authorities, Monroe then forced his way into the residence and pistol whipped the victim several times and forced him to fill garbage bags with electronics, jewelry and clothing.

After an extensive investigation by Bayonne Police Department detectives, consisting of canvassing, interviews, mobile surveillance and other techniques, Monroe was identified as the aggressor in both instances. 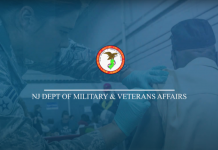