Over a dozen Jersey City community organizations, along with Ward F Councilman Frank “Educational” Gilmore have filed a 48-page lawsuit in Hudson County Superior Court in hopes of overturning the new ward maps approved in January. 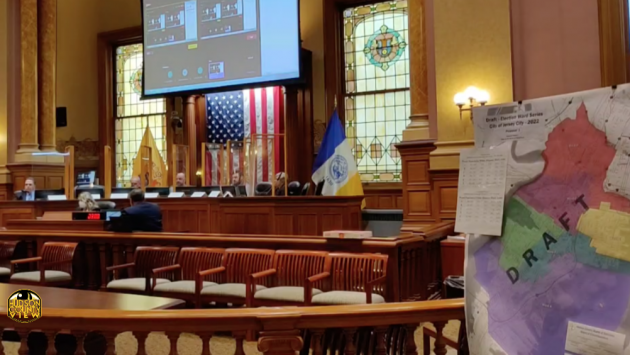 “This is a case of government abuse that adversely affects all voters and residents of Jersey City,” the complaint, where the plaintiffs are represented by Renee Steinhagen, Brett Pugach, and Bill Matsikoudis, says.

“Behind closed doors, the Jersey City Ward Commission disrupted and carved up long-standing neighborhoods, ignored natural geographic dividers, and even split buildings in half in order to create a map that may have satisfied N.J.S.A. 40:44-14’s standard regarding population deviation, but violated basic principles of fair representation and communities of interest that are embedded in that statute’s ‘compactness’ requirement.”

The Board of Ward Commissioners approved new maps for all six wards back on January 22nd after three hours of public comment against it, including Gilmore and Councilwoman Denise Ridley and Mira Prinz-Arey, as HCV first reported.

The meeting came after a hybrid meeting was only able to have 100 people access the Zoom call, leading to a postponement, with another delay occurring due to the 48-hour public notice requirement.

In a statement released last night, the plaintiffs said they “are outraged about the lack of transparency in the process; and in particular, residents from around the City believe that the gross reconfiguration of Ward F, resulting in the relocation of many Ward F residents into Ward A, and the splitting of the historical black neighborhood of Lafayette.”

They continue that Gilmore, who has spoken out against SciTech Scity, the Morris Canal Manor, and the privatization of Liberty State Park, had all of those areas – among others – moved to Ward A as a form of political retaliation.

“It appears that the Commission used voting precinct/election district boundaries based on 2010 Census data to delineate the redrawn boundaries of Jersey City’s 6 wards, which was an arbitrary, atypical metric that has resulted in jagged, awkward-shaped wards that do not fairly represent the constituents living therein,” the lawsuit also says.

“In particular, Ward F is now shaped like the salamander that historically gave rise to the phrase ‘gerrymandering,’ losing many of its working class Black and Hispanic constituents to Ward A, who have been replaced by higher income White and Asian residents, who were formerly living in Ward E – two wards with very different development patterns, different concerns, and different demands on their locally elected officials.”

In addition to invalidating the map, the plaintiffs seek a court order that indicates municipal ward law and the state constitution were violated, that Gilmore’s free speech was violated, along with the free speech and rights of Ward F residents, declaring that the commission illegally excluded the public from their deliberations, and setting a reasonable timeline to draw new ward maps.

“Jersey City residents were appalled at the way in which our city was redistricted. We are united in our dedication to seeing this map changed to something more fair and reflective of who we are as a city,” said Chris Gadsden, a spokesman for Jersey City United Against the Ward Map.

“The process under which the new Ward Map — which will affect Jersey City neighborhoods for the next ten years — didn’t take into account community feedback, natural boundaries, or our city’s history. We deserve a map that reflects the true Jersey City!”

He further stated that those who would like to make a tax-deductible contribution to the cause can do so here.

Gadsden said at the end of January the group was considering litigation in response to a story about an Action Network petition asking for the ward maps to be redrawn.

According to Steinhagen, while state statute requires a ward map challenge to be filed within 45 days, it is within 45 days of that their map was certified and submitted to the state with a report, which was February 3rd, as opposed to January 22nd.

Steinhagen has some recent notable victories against the city, playing a role in getting the city’s previous inclusionary zoning ordinance struck down, as well in getting the Morris Canal Manor project sent back to the planning board.

Both of those decisions occurred last August.

The defendants in the case, the Jersey City ward commissioners and the board chair, John Minella, also Mayor Steven Fulop’s chief of staff, could not immediately be reached for comment on Tuesday.